Orphans of the Storm® Dogs Hopeful for a Home

A heartwarming scene greeted me when I arrived at Orphans of the Storm® this week: a woman was standing at the front desk, filling out the necessary paperwork to adopt the adorable fluffball at the other end of the leash she was holding. It was obvious that the dog knew something good had just happened to him. When his new mommy started to say her goodbyes (because she wasn’t bringing him home until next week), the fluffball rolled over onto his back for a belly rub. I haven’t seen a happier doggy face in a long time. This is something I would love to see every time I visit the shelter, and something that I hope happens to the three dogs I met with this week.

Corky is a lovable four-year-old Hound/Shepherd mix. He was very interested in covering my whole face in doggy kisses, and put his front paws on my lap while I was sitting on the bench in order to reach. 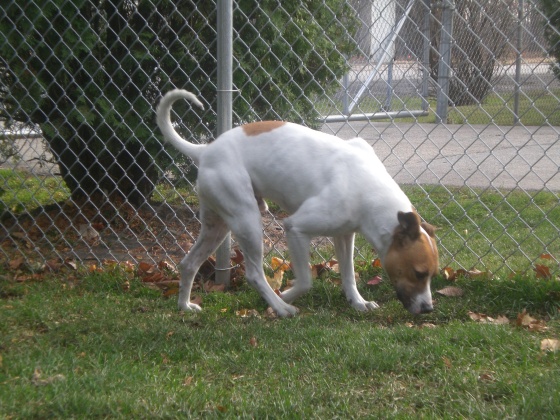 To give him some exercise, I tossed the tennis ball across the run. Corky went running after it and dropped the ball a few feet away from me—so he has a general idea of what fetch is. We did this a few times, and then Corky became more interested in sniffing around the bushes.

Corky looking at me

Corky is also a fan of doggy hugs. He ran up to me, put his front paws up on my stomach, and stood on his two back feet quite happily while I scratched his neck and ears. We did this several times during our time together. 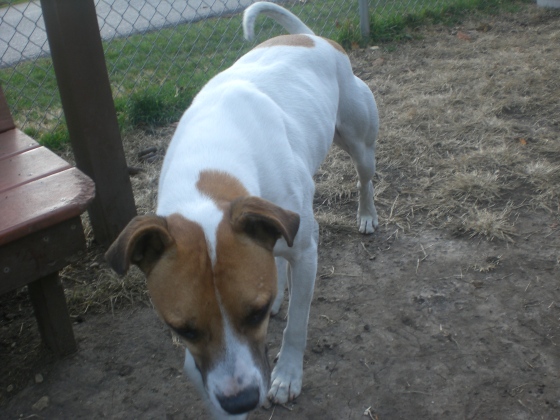 Piper, a five-year-old Shepherd mix, reminded me more of a polar bear than anything else—an adorable polar bear. Piper is a very calm dog, and even though he’s a bigger guy, he doesn’t pull on the leash with too much strength (except for when I was trying to get him back inside his kennel, but that’s understandable).

Piper enjoyed investigating underneath the bushes, and could spend many moments sniffing the same blade of grass. He was so focused, I didn’t want to interrupt him. I couldn’t resist scratching his ears, though. They were too cute to stay away from.

Unfortunately, he’s a little bit camera shy, so I couldn’t get a good picture of his precious face. You’ll just have to visit the shelter and see him for yourself! 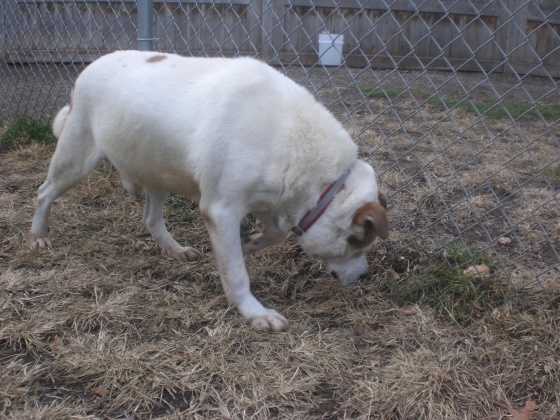 Peggy has been on my list for a while, because when you walk by her kennel and stop to say hello, she enthusiastically licks your hand. This three-year-old Hound/Pit Bull Terrier mix has been at Orphans of the Storm® since she was four months old, and would love the chance to make a family very happy. 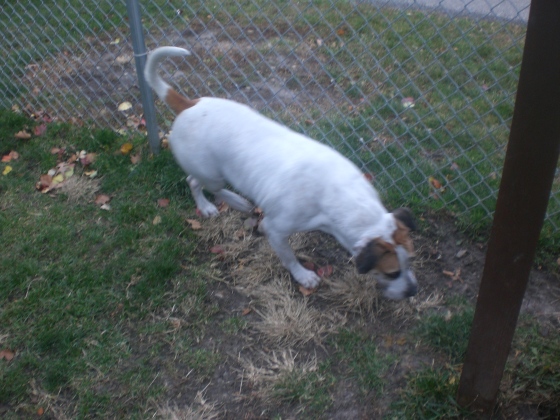 Peggy running around the run

Since Peggy has been at the shelter since puppyhood, she will need some training. She learns fast, though. While we were inside the run, she was getting excited and started jumping up on me. Thanks to Animal Planet’s “It’s Me or the Dog”, I tried the technique of simply turning my back to her. After just two more jumps, she stopped and kept her four paws on the ground. I praised her excessively for her smarts and good behavior.

Peggy, like Corky, has a general idea of what it means to “play fetch.” I would throw the ball, Peggy would chase after it, and then she would do a lap around the run with the ball still in her mouth. Then she brought it back to me. There’s nothing wrong with getting extra exercise, though.

Give these three pooches a chance and see how happy they can make you, and how happy you can make them!