Orphans of the Storm® Dogs with Spots

Meet the Pooches had reached a milestone: We now have over 20,000 views!!! Thank you to all the readers, and an even bigger thank you to those who have adopted Orphans of the Storm®’s fantastic pooches!

Although I have yet to see a Dalmatian come through Orphans of the Storm®, there are plenty of other dogs with adorable markings! If spots are your style, come meet these four great dogs who are waiting for their second chance at a loving home.

I first took out two kennelmates, Cooper and Fumble. Cooper is a one-year-old Dachshund mix, and Fumble is a three-year-old Chihuahua mix. Since they share their kennel very nicely, it’s a good sign that they get along well with other dogs. They were both very excited to come out with me and hurried us over to one of the off-leash runs where we could play. 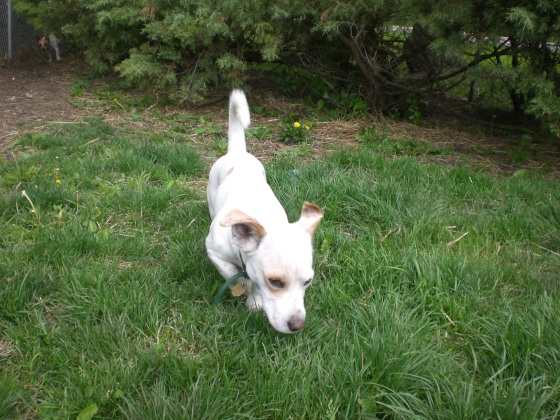 Cooper is such an affectionate little guy! He jumped into my lap and covered me with kisses almost right away. He is also a very happy dog, and seems like the type who will love anybody and everybody. When I sat down on the bench, he hopped up next to me and climbed right into my lap, trying to balance his four little paws on my legs.

Cooper being a happy dog

Fumble is a little more reserved, but still a very sweet dog. He wasn’t as in-your-face as Cooper, but when I walked up next to him and started scratching his ears, he seemed to enjoy it. If you scratch the big brown spot on the left side of his back, that’s where his tickly spot is hidden. He kicks his little back leg and wiggles; it’s adorable. 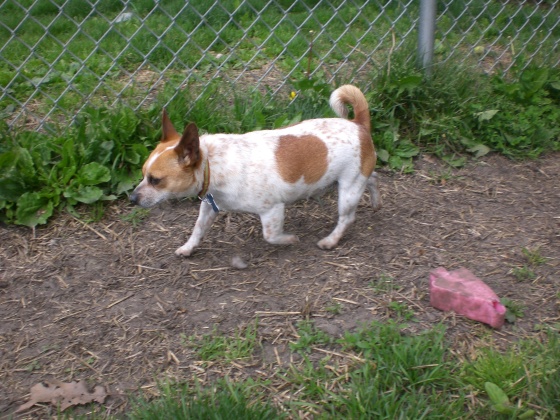 I threw one of the tennis balls and Cooper chased after it, then sniffed it with interest. The tennis ball was a little too big for Fumble, so I picked up one of the softer chew toys and threw that. Fumble loved it! He picked it up with his mouth, threw it in the air, rolled over onto his back, picked up the toy again, and rolled around some more. 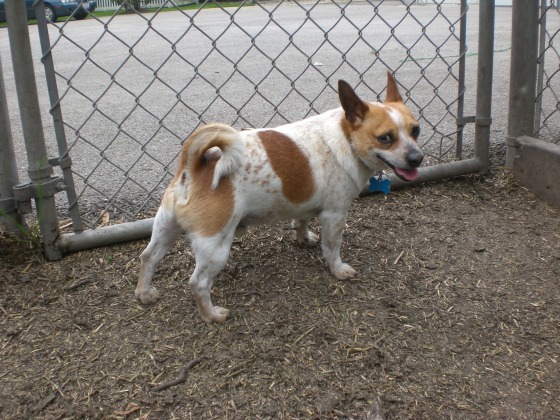 When I sat on the bench for a second time, Fumble and Cooper both came to stand next to me. Fumble even started to put his front paws in my lap, but Cooper took over and crawled in his way. Cooper likes attention–and it’s impossible to deny him, because he is so cute! 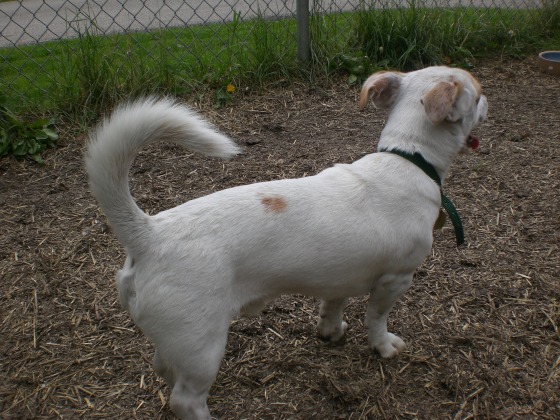 If you’re looking for a smaller dog who is equally happy sitting with you on the couch and playing with you in the backyard, definitely take the time to meet these two friendly pooches. 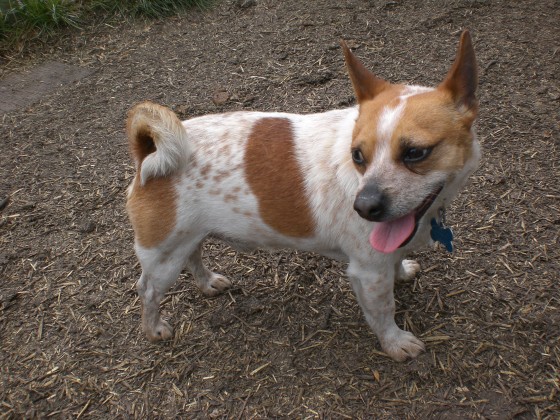 Fumble wondering, “Why did you stop petting me?”

Beau the three-year-old Australian Cattle Dog mix is a very handsome boy, and also incredibly friendly. Beau shares a kennel with Chloe, and I first saw him when I was at the shelter last week and he and Chloe were out in one of the yards to stretch their legs. Beau, being a Cattle Dog mix, sure can have that intense stare that I usually associate with Border Collies. But when you’re a dog the size of Beau, and you’re supposed to be in charge of a herd of cattle, you have to have some way to make them to listen to you.

After I let Beau into the off-leash run, I sat down on the bench so he could explore on his own for a few minutes. Instead of exploring, he came right up to me and put his front paws in my lap. He lowered his head so I could scratch his neck and ears for a few minutes.

Beau running with his fluffy tail in the air

I decided Beau should get some exercise, though, so I picked up a tennis ball and threw it. He chased after it and kind of brought it back to me, but then put his front paws on my legs so I could continue petting him. Cattle Dogs are known for being especially intelligent, so in case Beau doesn’t know any commands yet (though he might) he will definitely be easy to train and make a great companion.

Beau running back to me for a pat

Sweetheart the six-year-old Hound mix is appropriately named. She was curled up in her kennel when I let myself in to put her leash on and approached me a little shyly, but still with a wagging tail. Once we were out in the open, though, she perked right up!

Sweetheart yawning in the heat of the day

Sweetheart will be an extremely devoted and loyal pet to whoever is lucky enough to adopt her. Even after just a short time together, she was following me around the run wherever I walked. When I called for her, she came running with a big doggy smile and a wagging tail. She seems to just love having a human companion near her.

Sweetheart following me around the run

To go along with that, I sat down on the shady bench and she climbed up to sit next to me. We were there for a long time, her panting in my face and me petting her back, until a bee started buzzing around my head and I ran away. Sweetheart, of course, followed me happily.

Sweetheart being a sweetheart!

These four pooches, and all the others waiting at Orphans of the Storm®, are looking for their new mommies (or daddies)! So, as a belated Mother’s Day gift to yourself, visit the shelter and find the perfect pooch for you!