Orphans of the Storm® Dog Tails Wag on Willow

Orphans of the Storm® was all over the northern suburbs this weekend! I went to visit some of the pooches at Wags on Willow, on the corner of Waukegan and Willow Roads in Northbrook. There I was greeted by the three Chihuahua mixes Clay, Blitz, and Halo.

Clay the two-year-old was as happy and playful as he was when I met him at the shelter a few weeks ago. He kept wanting to play with Blitz and Halo, but the two of them were more interested in getting lots of love and attention from the humans. Clay would go into a play bow and then run towards Halo–but then would slip on the store floor. He took me on a walk around the store and loved smelling all of the different bones for sale. When he got tired out, he sat in my lap to recuperate before attempting to play again.

Blitz the five-year-old really gets around! He was at the Glenview Street Sale just a couple weekends ago, and I spent some time with him at the shelter as well. Blitz is happiest in a cuddly set of arms, and spent most of his time at Wags on Willow in the arms of one of the volunteers. He went outside for short walks every once in a while, but seemed to prefer the air conditioning inside. He loves attention and will bond quickly to whoever is lucky enough to adopt him. 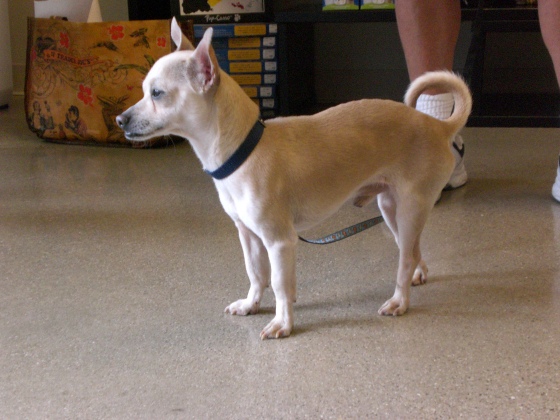 Blitz hoping to be scooped into a pair of arms

Halo the six-year-old is new to Orphans of the Storm® and he is a real sweetheart. He, like Blitz, seemed happiest when he was being held by a volunteer or curled up in a lap. He has a cute little face and a round little body. Halo eventually got used to Clay’s playfulness and at least sniffed him from time to time–but then would go find a person to interact with instead. Who can resist such a cutie?

Halo exploring all the goodies at Wags on Willow

Right before I left the store, a little boy came in and was excitedly petting all the dogs. He couldn’t decide which one he liked petting the most–they were all so great!

If you’re looking for a little four-legged friend to add to your family, and especially like the idea of having someone snuggling in your lap, then you can’t go wrong with any of these three lovable Chihuahuas.  Come visit them at the shelter–you’ll find all of them right next to the front office!

Orphans of the Storm® pooches will be back at Wags on Willow next Saturday, July 21 from 12pm-2pm! We hope to see you there!

Posted by Meet the Pooches on July 15, 2012 in Events and tagged adoption, animal shelter, Chihuahua, dogs, Northbrook, Orphans of the Storm, pets, Wags on Willow.