Remember, the Orphans of the Storm® Holiday Pet Showcase at Northbrook Court starts tomorrow and goes all the way until December 24. Relieve the stress of holiday shopping by meeting some adorable adoptable dogs and cats, and maybe bring one home with you! You can also stop by the shelter and meet these lovable pooches:

Nino the six-year-old Miniature Pinscher mix is a little bundle of energy who had a great time romping around the off-leash run. He has excellent balance because he likes to stand up on his hind legs and wave at people with his front paws. It’s pretty darn cute. He’ll also stand on his hind legs and put his front paws in your lap while you pet his head and scratch his neck.

Nino playing in the hay

Nino has had a couple of different kennelmates who have since been adopted, so he could go to a home with or without another dog. This little guy has an adorable face and he always looks like he’s smiling, which makes sense because he’s a happy dog. He would be so much happier if he had a home to call his own, though. Could that home be with you? Come in soon to meet Nino and find out!

Nino smiling for the camera

Zeus the one-year-and-ten-month-old Mastiff mix has definitely found his place on my list of favorites. I could gush over him all day because I think he’s just about perfect. A dog as ginormous as Zeus could easily throw his weight around if he wanted to, but Zeus was an excellent walking buddy and heeled without even being told. He’s so big that it probably takes a lot of energy for him to pick up speed, so he’s more of the meandering type. 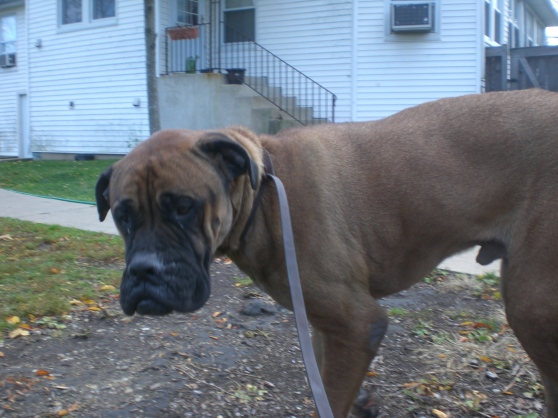 Does Zeus have the most lovable face or what?

Zeus gets along with everybody and everything. When little Gypsy came by, Zeus was politely interested, even though Gypsy is about the size of Zeus’ head. Zeus absolutely loves belly rubs and rolled over for one on several occasions, batting my hand with his huge paws if I stopped for too long. He also thinks he’s a lapdog, so whoever adopts him better have space on the couch and be okay with sharing. Zeus is so well-mannered and so lovable, I can’t see him staying at the shelter for much longer. Come in soon if you think Zeus is the pooch for you! 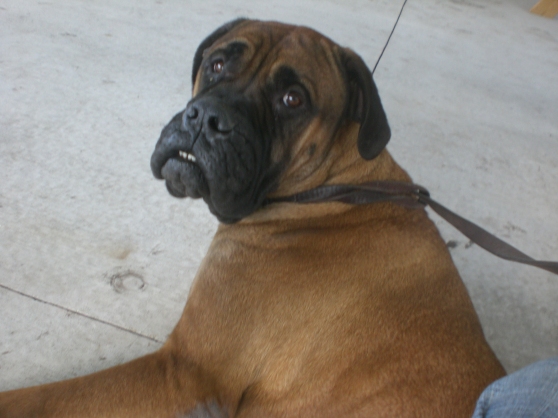 Zeus says, “Rubbing my belly is more important than taking a picture.”

Bruce the one-year-old Bloodhound mix is another great dog. He’s barely out of puppyhood, so he still has plenty of playful energy and enjoys every opportunity to stretch his legs. He and Mona (who got adopted, hurray!) were racing each other up and down the fence in the off-leash run, and Bruce’s long ears were helping him fly through the air. 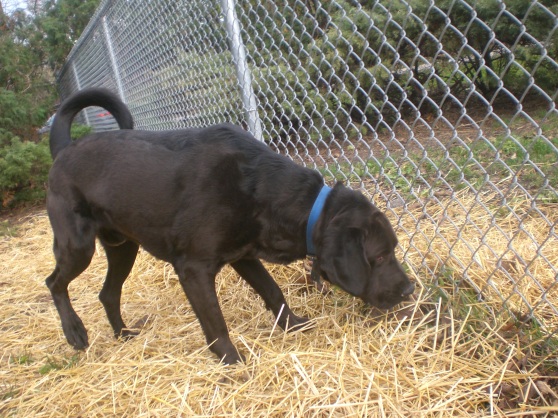 After Bruce got his initial burst of energy out of his system, he settled down and stood next to me while I scratched his neck. You’ll have to be okay with a bit of doggy drool if you bring Bruce home, because as a Bloodhound he uses that and his ears to pick up all of the scents he wants to track. Bruce is sure to be a fun addition to any family, so stop by the shelter and say hello!

I also spent time with Jade, Hugo (who just loves to give doggy hugs), Tilly (who I like more and more each time I walk her), Harley (who is so sweet–why is he still at the shelter?), Ebbie, Sebastian (who snuggled into my lap as soon as I knelt beside him), Winter, Rock, and Frankie (who is another favorite of mine). So many dogs of different sizes, looks, and personalities–but one thing they all have in common is that they will make their new families very happy!