What better time to bring a dog into your home than the dog days of summer? It’s meant to be! Stop by Orphans of the Storm® soon to meet your new best friend.

Balley the one-year-old Boxer/Mountain Cur mix is a total cuddlebug. She’ll sit right in front of you and tuck her head into your lap so you can pet her. When you stop, she sticks her paw out and taps your arm to get your attention again. Balley also likes to roll around on her back and get a belly rub simultaneously.

Balley says, “Maybe put down the camera and pet me instead?”

Balley walks really nicely on the leash, and if you stop walking then she will come back to you and sit at your feet until you start moving again. Balley likes people so much that she has some separation anxiety, so she would do best in a home where someone is around the majority of the time. Since she’s so sweet and gentle, she could go to a home with kids. Stop in soon to say hello to Balley!

Balley coming in for a doggy kiss

Brutus the three-year-old Hound mix is very excited and energetic when he first comes out of his kennel. Brutus loves to greet people with doggy hugs, and that’s what he did with me and two other volunteers who we passed on our walk. Brutus is also a water dog. He would love to have a puppy pool (or, even better, a full-size pool!) to splash around in during the summer. He’s also one of those dogs who tries to “eat” the spray from a hose.

Brutus is a happy boy. He’ll join you on the bench for snuggles before heading off on a walk. Brutus prefers to walk at a quick pace but doesn’t pull too much once he gets his initial burst of energy out of the way. Brutus likes other dogs, but isn’t as fond of kids, so he would do best in an adult home with or without another dog. If that description fits you, come in soon to meet Brutus! UPDATED 2019: Brutus has attended obedience classes and mastered our agility course. He regularly attends play group, though he prefers smaller groups. He has shared his kennel with another dog and loves to play! 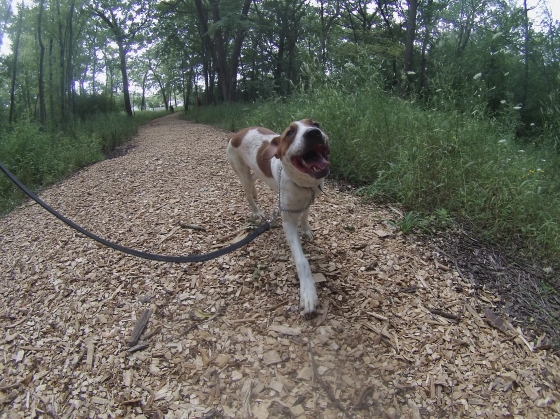 Arnold the three-year-old Staffordshire Bull Terrier mix is a good boy. When I came to his kennel, he sat nicely without me even asking while I put his leash on. We first went to the off-leash run, where Arnold did some sniffing on his own but then spent most of the time with me so he could get pet. He joined me on the bench and gave me a couple doggy kisses.

Arnold with his puppy pool

Arnold can pull a bit on the leash, but for the most part he does a nice job being a walking companion. When we were making our way around the woodland preserve, Arnold liked exploring in the tall grass. He also enjoyed a dip in the puppy pool after our walk. Arnold has one of those lovable wide faces and always seems to be smiling. Say hello to Arnold on your next visit to the shelter!

Arnold has a heart-warming smile

I also saw Bella, Belle, Big Boy (who is so snuggly and sweet!) and Mojo, Bud, Buddy and Shadow, Delilah, Diamond (now known as Riley), and Lucy.

And don’t forget–Saturday, August 19 is Clear the Shelters!

Leave a Reply to Get to Know Orphans of the Storm®’s Top Dog Competitors! | Meet The Pooches Cancel reply