Adopting a middle-aged and older dog has many benefits compared to adopting a puppy. And when dogs are on the medium or smaller size, the usual “senior” cutoff tends to get pushed back a few years. Older dogs have so much love and companionship to offer, and will appreciate having a loving home. There are several older dogs at Orphans of the Storm® right now who are ready and waiting to meet you!

Donny the eleven-year-old Mountain Cur mix has come a long way since he first arrived at the shelter. He used to be nervous and didn’t like leaving or going back into his kennel. Now, the volunteers think he’s great and he’s a perfect walking companion! Donny likes to sniff around and explore during his walks. He will also happily try to chase squirrels. (That’s the only time he pulls on the leash.) 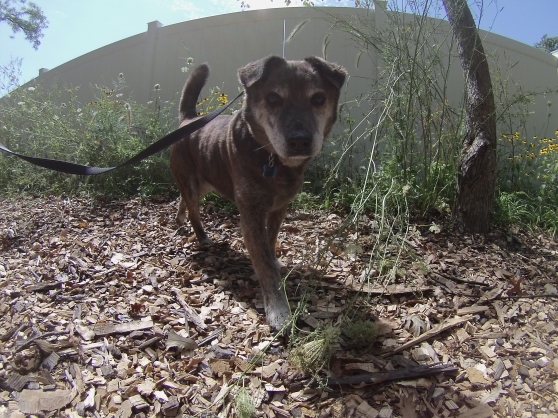 Donny was very alert for our walk

Donny can be a little bit of a “grumpy old man.” Sometimes he’s happy to stand or sit by your side and get his ears scratched, and sometimes he would just prefer to do his own thing and not be bothered. But everyone can get a little moody in old age, so we don’t hold that against Donny. Overall, he’s a calm guy who would probably prefer being in a calm, adult home where he can come out of his shell even more. Stop in soon to see if Donny is the one for you!

Donny smiling in the sunshine

Jack the seven-year-old Jack Russell Terrier mix is super cute. He is also super athletic. Don’t be fooled by his small stature, because this guy’s little legs move fast. Sometimes I had to jog in order to keep up with him during our walk around the woodland preserve. Since Jack was always on the move, it was hard to get an in-focus picture of him! 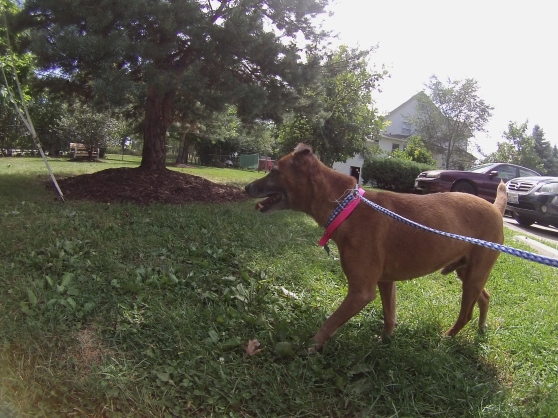 Jack leading the way on our walk

Jack might have fun doing agility, because he jumped up and over a number of benches and also climbed up to the top of the picnic table. Jack likes to move at a quick pace, but he also appreciates having the chance to sniff things thoroughly. Jack went right into the bushes or through the tall grasses in order to find more good smells. This little cutie will bring lots of fun to his new family. Come in soon to meet Jack!

Lucky the eight-year-old Smooth Fox Terrier mix was a little unsure about coming out of his kennel at first, but he warmed up as soon as his leash was on. Whenever you start petting Lucky for more than a few seconds, he’ll sit right at your feet so you can continue. And when he sat, he reminded me of Ancient Egyptian dog statues because of his perfect posture! 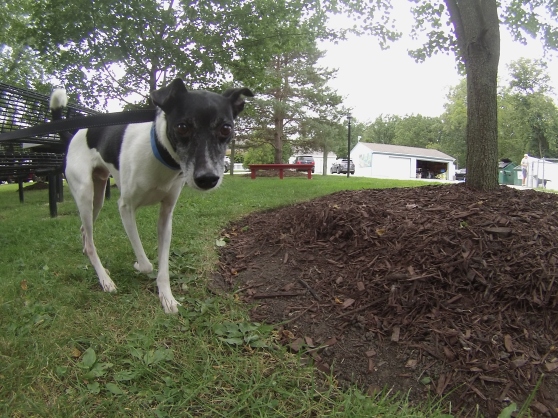 Lucky is a good walking companion. He rarely pulls on the leash and mostly walks by your side or just a few steps ahead. Although he didn’t get nose-to-nose to other dogs while we were out, Lucky seemed politely interested from a short distance, particularly with dogs that were closer to his size. Lucky will feel even more lucky once he has a family to call his own. Stop in soon to meet Lucky!

21 thoughts on “Orphans of the Storm® Smaller, Older Dogs”