Orphans of the Storm® Dogs Who Think Two’s Company

If you’re looking for a dog who likes other dogs–whether you already have one (or more) at home, or want to go to dog parks, or plan to take your dog to doggy daycare–there are plenty of dog-friendly pooches at Orphans of the Storm® right now!

Kaffee the two-year-old Labrador Retriever mix has a very interesting look. He has one blue eye and one brown; he has black spots all over his face like a Dalmatian; and he has a big brown patch on his back like a Hound! You will surely get lots of compliments and questions about Kaffee whenever you take him out and about.

Kaffee showing off his spots

Kaffee is on the shy side and mostly kept to himself when we were in the off-leash run. But he would take occasional breaks from sniffing and come over by me so I could pet him a bit. He also walks nicely on the leash. Kaffee is currently sharing his kennel with Thunder (see below), so he could go to a home with or without another dog. Come in soon to meet Kaffee! 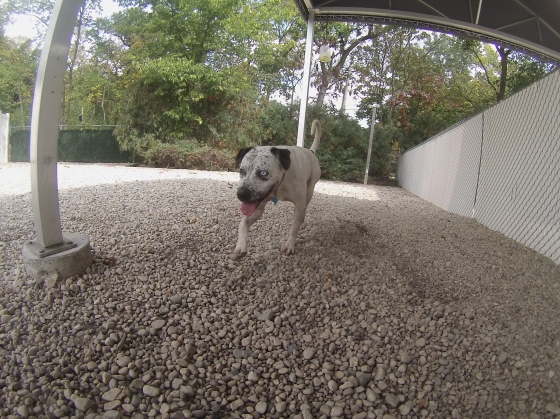 Thunder the seven-year-old Weimaraner mix (not to be confused with the other Thunder) is a big, strong boy, but very sweet. He wanted to be off and running as soon as he came out of his kennel, but he settled down quickly once we were in the off-leash run. Thunder did his own thing at first, but also seemed to like following Kaffee, his kennelmate (see above), around the run.

Thunder is ready to be someone’s best buddy

Thunder warmed up to me after a few minutes and then started following me everywhere so I could keep petting him. He would also come to me when I called. Thunder didn’t give any doggy kisses on this particular visit, but he did like putting his nose to my nose. Although he’s a big guy, he doesn’t really seem to throw his weight around. Stop by soon to see if Thunder is the one for you!

Constance the two-year-old Mountain Cur/Hound mix is very sweet and snuggly. The first thing she did when she came out of her kennel was give me a doggy hug. When we were in the off-leash run, Constance often put her front paws in my lap so I could pet her and so she could give me doggy kisses. She never strayed too far from me.

Constance likes to both give and receive kisses

Constance is currently sharing her kennel with Tucker (see below) and gets along great with him, but she can be a little bark-y around other dogs she hasn’t been formally introduced to (like the dog on the other side of the fence in the off-leash run). Constance is sort of mini-Hound-sized, so she could be a sweet lapdog. Be sure to say hello to Constance on your next visit!

Constance knows how to smile

Tucker the three-year-old Treeing Walker Coonhound mix is a sweet and mellow guy. He greeted me with a doggy kiss right away. When we were in the off-leash run, he would take a break from his sniffing every so often and come back to me so I could pet him more. He particularly likes getting his back and floppy ears scratched.

Tucker not sure about the camera

Tucker was interested in a tennis ball when I threw it and went over to sniff it, but didn’t pick it up or bring it back to me. Maybe his new family can work with him on his fetching skills! Tucker gets along well with other dogs. He’s currently sharing his kennel with Constance (see above) and politely sniffed the dog on the other side of the fence when we were in the run. Come in soon to say hello to Tucker!

Tucker is a handsome guy

Hank the five-year-old Bluetick Coonhound mix found himself at the shelter because his original owners moved and didn’t bring him with. Hank is a great walking companion. He usually walks at a faster pace but doesn’t pull at all, and he also takes plenty of breaks to use that good Hound nose. He seems like a pretty mellow dog; he didn’t bark once when we were out together.

Hank enjoys a good pet and will stand right by your side while you pet him. He might even rest his chin on you, or he’ll poke his nose to your nose. He didn’t give other dogs a second glance while we were out, but I didn’t take him close enough to see how he did in a real meeting. Hank would do best in an adult-only home. If that sounds like you, stop by soon to meet Hank!

Hank keeping an eye on things

Reeco the six-year-old Staffordshire Bull Terrier mix came to the shelter with his brother Harley, who has since been adopted. Reeco is a little strong and can pull a bit on the leash when he first comes out of his kennel, but settles down pretty quickly. Reeco participated in the Top Dog Competition last fall and has mastered the agility course. He has also attended obedience classes. 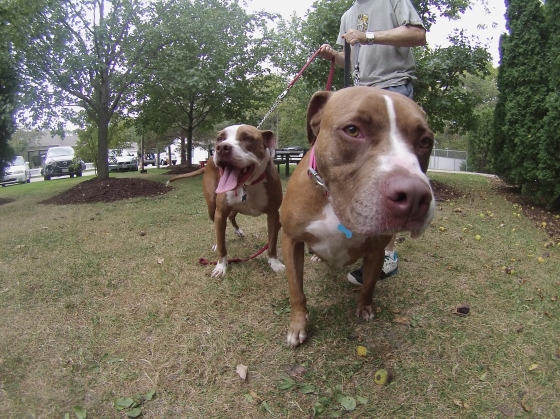 Reeco loves getting his side rubbed. He’ll lean against your legs and practically fall over because he’s enjoying himself so much. He also gives your hands lots of doggy kisses while you’re petting him (which can sometimes turn into little love-nibbles when he’s extra excited). Reeco gets along with other dogs and attends play group. Be sure to say hi to Reeco on your next visit! 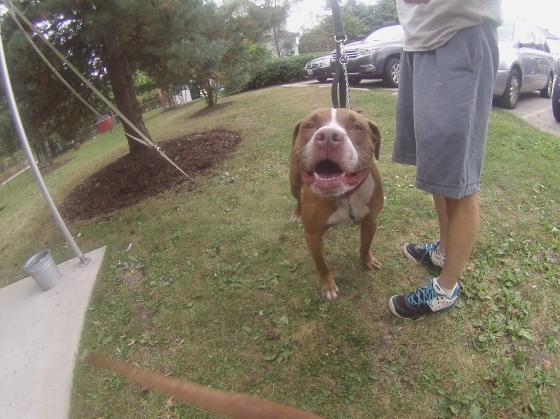 Reeco is a happy guy