Orphans of the Storm® Staffie Dogs

I walked a variety of breeds at Orphans of the Storm® this week, but the other three have already been happily adopted! So I have two Staffordshire Bull Terrier mixes to introduce to you today. (It was a hot day when I was there, so both dogs got hosed off–please excuse the wet fur in the pictures!)

Katfish the two-year-old Staffordshire Bull Terrier mix is a big boy. The first collar I tried to put on wouldn’t even fit over his head! But once we got that sorted out, Katfish led the way to the woodland preserve. He walks pretty well on the leash and only pulls occasionally when there’s something in particular he wants to sniff. He’s a smart boy who knew it was best to stay on the shady side of the trail.

Katfish is a happy guy

Katfish was a little hesitant about getting hosed off at first, but then he seemed to enjoy it. He likes getting scratched on the top of his head between his ears. Katfish can be bark-y around some dogs, but doesn’t pay much attention to others. He had a good time exploring the off-leash run, and although he poked a rope toy with his nose, it was too hot to do much fetching. Come in soon to meet Katfish! 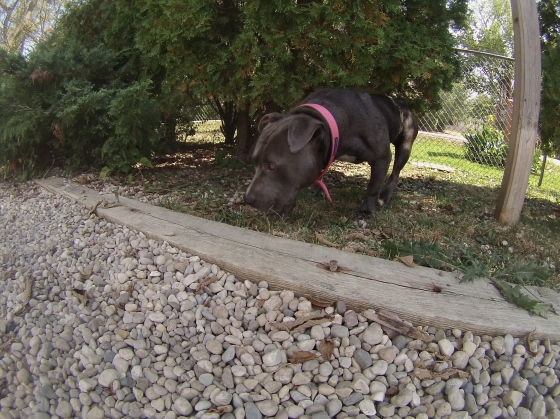 Katfish “chilling” under the bushes

Yeyo the eleven-year-old Staffordshire Bull Terrier mix seems like a pretty mellow guy. He absolutely loves sniffing around, and scratches the grass or gravel or woodchips (whatever surface he’s on) with his front paw to get down to the extra-good smells. Yeyo unfortunately had both of his ears entirely cropped off, which certainly gives him a different look. 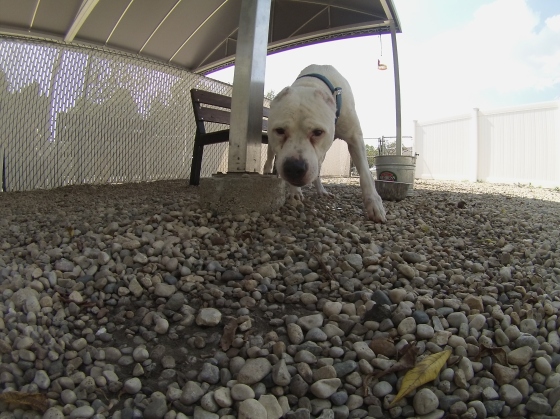 Yeyo follows his nose wherever it goes!

Yeyo didn’t make a peep the entire time we were out, and I also didn’t see him barking inside his kennel. He can pull a bit when he sees other dogs, but otherwise walks really nicely on the leash. Although he would keep his nose to the ground when I pet him, his tail would start wagging faster, so I could tell he enjoyed the attention. If you’re thinking about bringing home a senior dog so they can enjoy their golden years, be sure to say hello to Yeyo on your next visit!