October is Adopt a Shelter Dog Month, and the ASPCA has started the #FindYourFido campaign to help get more dogs adopted. Come to Orphans of the Storm® this month (and every other month!) to meet your new Fido.

Bo the seven-year-old Labrador Retriever mix is a good boy. He makes a great walking companion because he moves at a nice pace and doesn’t pull on the leash. Bo is also happy to take breaks during his walk so he can get pet. Whenever I knelt down to his level, Bo came over and snuggled up next to me. 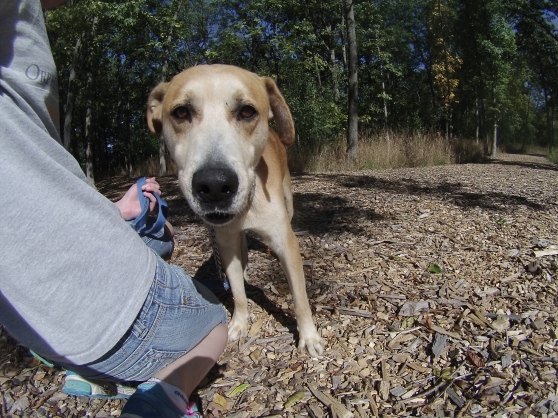 Bo likes following his nose, even when it leads him into grasses or bushes that are taller than he is. Bo isn’t a huge fan of other dogs, but if he’s just passing them during his walk, he doesn’t pay much attention to them and just keeps walking. He attends play group with certain dogs and has made some furry friends, but still isn’t too fond of others. Bo is a sweet boy looking for a comfy lap where he can rest his head. Come in soon to meet Bo! 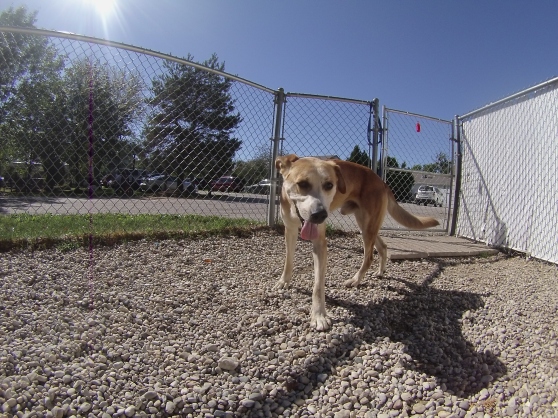 Bo is a happy guy

Goliath the five-year-old Great Pyrenees mix is a giant fluffball. Because of his size, he can pull on the leash and you have to be ready to go in the direction he wants! Overall, though, he does a pretty good job on the leash and just prefers to move at a faster pace. Goliath enjoyed playing with a sheep-shaped doggy toy (appropriate for his breed’s history).

Goliath is easy-going when it comes to maintaining his appearance, which is good because he’ll need lots of grooming to keep his fur soft and fluffy. Goliath stood perfectly still while I picked out some burs, twigs, and leaves that his fur had picked up during our walk. Goliath enjoys a nice scratch between the ears and on his back. He isn’t a fan of other dogs, particularly smaller dogs, so he would do best as the only dog in his new home. But with a dog the size of Goliath, one is plenty! Come in soon to see if he’s the one for you.

Goliath leading the way through the woods

Snowball the seven-year-old American Eskimo mix is so cute and so sweet. She’s like a little cotton ball! Snowball has the softest fur I have felt in a long time, and she’s perfectly content to let you pet her as long as you’d like. She’s great at walking on the leash and is also super attentive. She would stop and look up at me every once in a while during our walk to make sure we were on the same page.

Snowball will happily put her front paws in your lap or curl up next to you while you’re sitting down. We had a nice, relaxing time together when she jumped up on the bench next to me and laid down. We could have sat there all afternoon! Snowball also doesn’t seem to mind other dogs. She politely sniffed one during our walk and didn’t pay attention to the other ones we passed. If you’re looking for a sweet little lapdog, come in soon to meet Snowball!

Snowball enjoying a break on the bench

Diamond the four-year-old Staffordshire Bull Terrier mix (not to be confused with the other Diamond/Riley) can be a little hyper when she first comes out of her kennel, but she settles down. She gets excited and wants to play tug-of-war with the leash, but as soon as you start walking she stops and is just happy to be out and about.

Diamond coming over for a cuddle

Diamond prefers to walk at a quick pace or jog, so she’ll be happy to go home with someone who will take her on plenty of walks. But Diamond is always up for taking a break from her walk so she can get some snuggles. Diamond put her front paws in my lap and stood on her back legs so I could pet her some more. This fun and happy girl is looking for a fun and happy home! Be sure to say hi to Diamond on your next visit to the shelter. 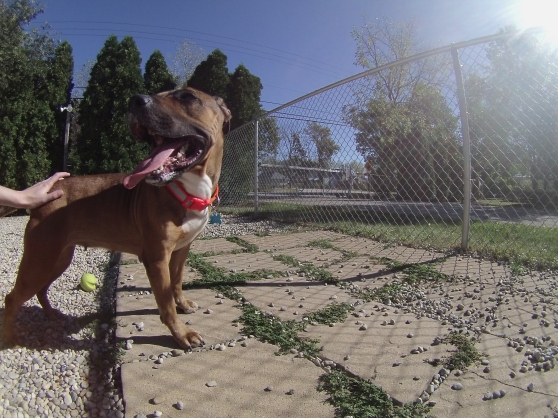 Diamond loves getting her hips scratched