Orphans of the Storm® has made Adopt a Senior Pet Month into a two-month, end-of-year special adoption event. Dogs and cats who are 8 years and older will have their $90 adoption fee waived through the end of 2018. Our partner veterinary office, Ruth Helen Wolf Animal Hospital, will also donate the cost of some medical fees including senior wellness exam, senior blood work, distemper and rabies vaccinations, and new tag. I met some new senior dogs this week, but first, here is a list of other seniors I’ve profiled before, and their current ages:

On to new pooches, both older and younger!

Whiskey the five-year-old Hound mix is a super happy pooch. She wags her tail so hard when she’s getting pet that her entire back half wiggles. Whiskey is very affectionate and loves to cuddle and give doggy kisses. When she sees someone she knows, she goes straight up to them and leans against their legs so they have to stop and pet her.

Whiskey keeping an eye on things

Whiskey is a nice walking companion and does a good job on the leash. She happily joined me on the bench whenever I sat down. Whiskey gets along with other dogs and is currently sharing her kennel with Huckleberry, so she could go to a home with or without other dogs. Whiskey is also housebroken and gets along with children, so she’s ready to join a new family today. Come in soon to meet sweet Whiskey!

Geezer the eight-year-old Treeing Walker Coonhound mix does not act like a geezer at all. He was leaping and bounding around the Enrichment Park and didn’t show signs of slowing down. He politely sniffed the dog on the other side of the fence but didn’t pay much attention otherwise. Geezer will take the occasional break to get pet, though, and enjoys receiving lots of attention and cuddles. 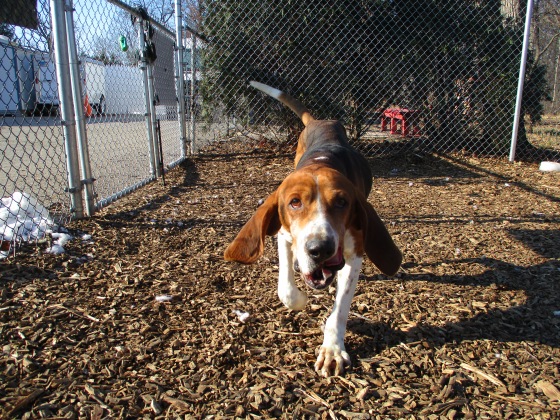 Geezer coming over for a cuddle

Geezer goes into full Hound mode once he hits the trail. He led the way on our walk around the woodland preserve and moved at a quick pace. His nose is either close to the ground or high in the air, to catch as many scents as he can. Geezer has that lovable Hound face that will put a smile on yours. Be sure to say hello to Geezer on your next visit to the shelter! 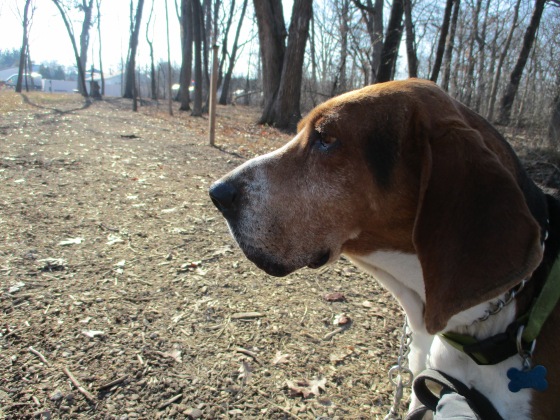 Hazel the nine-year-old Catahoula Leopard Dog mix is currently undergoing heartworm treatment, so she’s looking for a special home that will help her with her recovery. She isn’t supposed to overexert herself, but that isn’t an issue because Hazel is super mellow and easygoing. Hazel walks nicely on the leash. She likes to lead the way, but will stop and follow you in a different direction if you want her to. 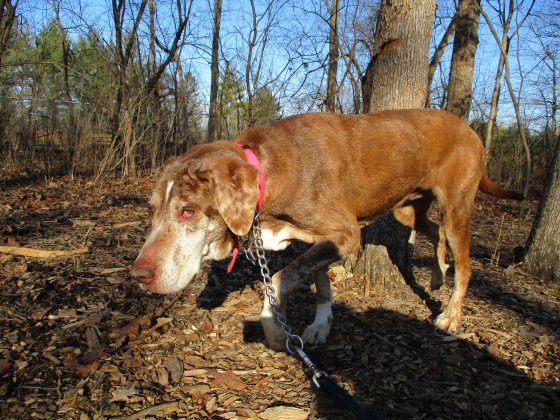 Hazel is a good-natured girl

Hazel enjoys getting pet and will stand by your side as long as you keep petting her. She has pretty coloring and one blue eye, one brown eye. Hazel seems to get along with other dogs, especially ones that are more her energy level. If you’re willing to open your home to a senior with some extra medical needs, Hazel would be very grateful to go home with you!

Hazel glowing in the sunshine

Jericho the four-year-old Jack Russell Terrier mix has that typical Terrier spunk. His little legs are almost always on the move. Jericho likes playing with toys and knows how to play fetch, or is just as happy to chew on a squeaky toy. Jericho walks well on the leash and doesn’t pull much. Jericho gets along with other dogs and is currently sharing his kennel with a dog closer to his size, so he could go to a home with or without other dogs.

Jericho is a cutie-patootie

Jericho is a very affectionate boy. He likes to cuddle and give lots of enthusiastic doggy kisses. He joined me on the bench and put his front paws in my lap. He also climbed into my lap when I knelt down to his level. If you stop petting him before he thinks you should, he’ll jump up and tap your leg with his front paws until you reach down to pet him again. If you’re looking for a fun and snuggly companion, be sure to meet Jericho! 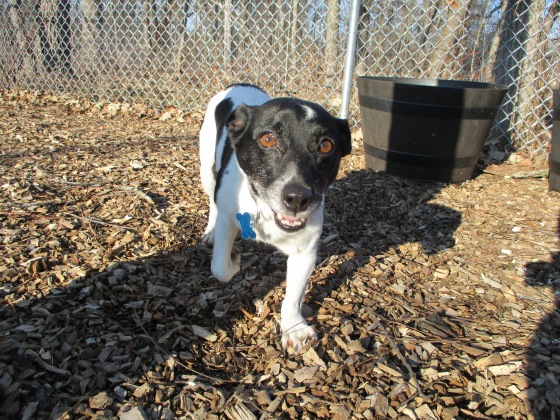 Jericho will smile for snuggles