Some dogs at Orphans of the Storm® like snow more than others. This week’s dogs all seemed to enjoy it!

Carson the eight-year-old Shepherd mix will fool you with his gray snout. You may think he’s a slow-moving senior, but think again! Carson acts like a puppy. He absolutely loves playing with toys and likes to have many toys to choose from so he can switch between them. Carson likes to run around while carrying a toy in his mouth, or will throw toys in the air and play fetch with himself.

Carson had the best time in the snow. He flopped down and rolled around in it multiple times. Carson also enjoys getting belly rubs while he’s stretched out on his back. He’s a sweet, friendly guy who likes to give doggy kisses while you pet him. While Carson is playful off-leash, he’s a good walking companion on-leash. If you’re looking for an older dog who still has puppy qualities, come in soon to meet Carson!

Boulder (or “Bo”) the one-year-old Labrador Retriever/Hound mix gave me a doggy hug as soon as I took him out of his kennel. He proceeded to cover my face in doggy kisses. Boulder is very appreciative of going for walks, apparently! He also has one of the most waggy tails I’ve seen. He wags his tail so often and so fast that it’s basically just a blur.

Boulder loved romping around the Enrichment Park, both on his own and while racing the dog on the other side of the fence. He slowed his pace a bit when we made our way around the woodland preserve trail and was also happy to pause every once in a while to get some snuggles. Although Boulder is affectionate with adults, he isn’t as much of a fan of children and is looking to go to an adult-only home. If that fits your situation, be sure to say hello to Boulder on your next visit to the shelter!

Boulder coming over for a cuddle

Tyson the eleven-year-old Miniature Schnauzer mix is too cute. Even though he’s older, Tyson ran around the Enrichment Park with the same enthusiasm as younger dogs. Tyson doesn’t mind being picked up and held in someone’s lap. He was also a good sport about standing still while I pulled off the snowballs that had formed on his paws before we went back inside. 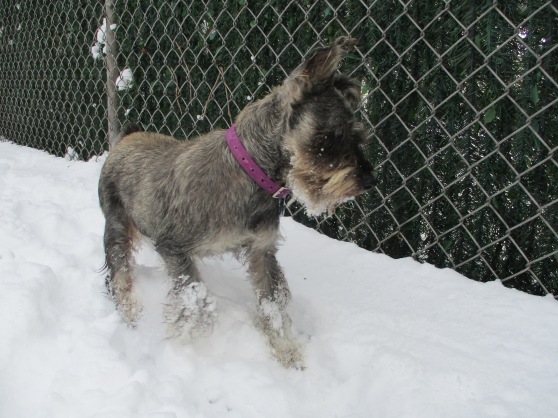 Tyson is so handsome with his beard

Tyson walks nicely on the leash. The snow was basically up to his belly, but he marched through it like a champ. He seems politely interested in other dogs and put his little front paws on the fence to get nose-to-nose with Tom (who barked right in Tyson’s face, but Tyson didn’t bark back). Tyson still has plenty of love and companionship to offer, so don’t skip over him just because of his age. Come in soon to meet Tyson!

Dominic the one-year-old Hound mix has that happy-go-lucky puppy spirit. Everything is fun and games for him. He made sure to sniff every toy in the Enrichment Park and gave some a nibble. Mostly, Dominic enjoyed stretching his legs and running. He would chase after the toys I threw, but still needs to work on the finer points of “fetch.” 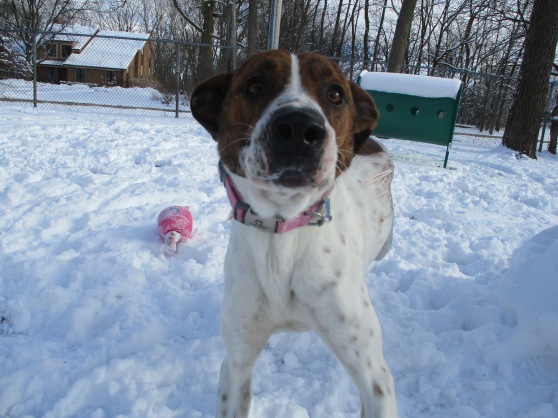 Dominic skidding to a stop

Dominic likes to give doggy hugs and will stand next to you on his back legs so you can scratch his ears and sides, while giving you a big doggy smile. Since he’s still young, he could benefit from some leash training (Dominic sometimes thinks the leash is another chew toy). Dominic has already been to the shelter’s off-site locations so he can meet more people. Stop in soon to see if Dominic is the pup for you!

I also saw Blue, Dunkin the Red, Jack (who loves playing with other dogs), Maya, and Carlos and Vanilla (who are BFFs and have off-leash playdates together).