Orphans of the Storm® will be closed this Monday, September 2, for Labor Day–but open our regular hours on Saturday and Sunday! So you still have time to find a new furry friend before the holiday.

Lobo the one-year-old German Shepherd mix is a happy, well-behaved pup. Even though he’s barely out of puppyhood, Lobo already has several qualities that will make him a great pet. For example, he’s housebroken, walks nicely on the leash, and gets along with kids. Lobo is also affectionate. He put his head in my lap so I could pet him, and also gave me a couple doggy kisses.

Lobo likes to play and particularly likes tennis balls. He’s happy to both play fetch and just carry the ball around in his mouth. But he knows that playtime is different from walk time, and dropped the tennis ball as soon as I put his leash back on. Lobo participates in play groups. He was a little nervous with the other dogs at first but is getting more comfortable each time and likes to sniff all the other dogs hello. Be sure to say hello to Lobo on your next visit to the shelter!

Lobo happy with his tennis ball

Enzo the one-year-old Pit Bull Terrier mix has the cutest face, but is so camera-shy that I couldn’t get a picture to do him justice! Enzo enjoys rolling on his back in the grass and getting belly rubs at the same time. He already knows the “sit” command and might know a few others–but if he doesn’t for sure, he will be a quick learner!

Enzo leading the way around the trail

Enzo prefers to walk at a quick pace but doesn’t pull too much on the leash as long as you’re keeping up with him. He participates in play groups and enjoys being with other dogs. He particularly likes to play tag and the other fast dogs like playing tag with him! Enzo is quickly becoming a volunteer favorite. Come in soon to see why! 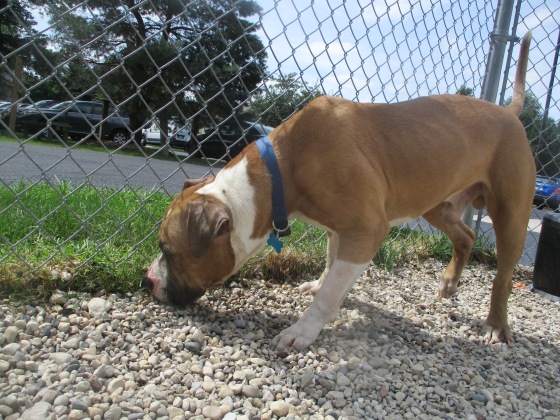 Enzo refusing to look at the camera