It was a little damp at Orphans of the Storm®, but the dogs didn’t seem to mind! (My camera did, though, so I apologize for the blurry photos.)

Prince the three-year-old German Shepherd/Pit Bull Terrier mix gave me a doggy hug accompanied by a very happy wagging tail as soon as I let him out of his kennel. Even when I let him off-leash in the Enrichment Park, he decided he would rather give me another doggy hug than go play. Prince is a very snuggly pooch! He also likes to give the occasional doggy kiss. 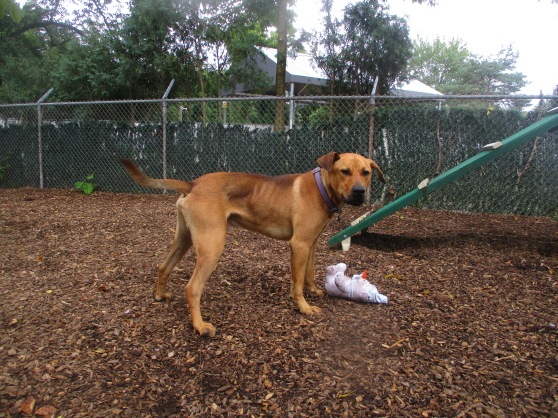 Prince taking a break from his squeaker snowman

Prince has plenty of energy. He enjoyed romping around the Enrichment Park and playing with a squeaky toy. He’s one of those dogs who can play fetch with himself. Prince is a pretty good walking companion, but in general likes to walk at a quicker pace. He was happy to take a break every once in a while to put his front paws in my lap and get more pets. Prince gets along with children, so he could go to a family home. Be sure to say hello to Prince on your next visit to the shelter!

Rachel the three-year-old Staffordshire Bull Terrier mix loves people so, so much. Meet her once, and she will greet you like her best friend forever after. This greeting includes a doggy hug and covering your entire face in lots of doggy kisses. Rachel has one of the most waggy tails I’ve encountered. Her tail was wagging so hard when I was petting her that she knocked my camera out of my hand! 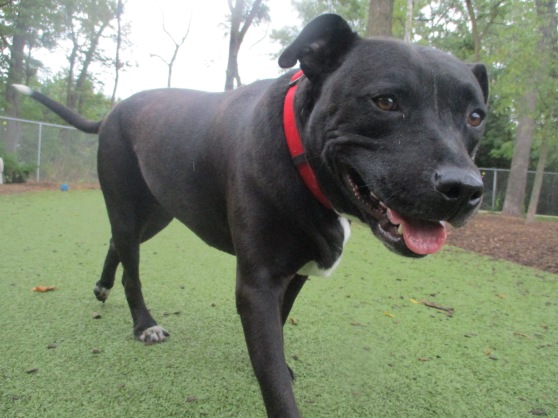 Rachel is a ray of sunshine!

Rachel particularly loves getting her hips and sides scratched. She does a little dance and looks at you with a big doggy smile. Rachel is a nice walking companion, which is good because she’s a little on the chunky side and could use regular walks to shed a few pounds in her new home. Rachel has participated in a few play groups and is getting more comfortable with the other dogs each time. If you’re looking for an extra-happy girl to join your home, come in soon to meet Rachel!

Rachel didn’t mind getting her white paws a little muddy

Reno the four-year-old Pit Bull Terrier mix is one of the strongest dogs at the shelter right now, but don’t let that deter you! He’s a very friendly boy. He just likes to lead the way and decide where to go on his walks–however, he isn’t stubborn about it and will start following you if you want to go a different direction. Reno also likes spending time in the yard and enjoyed following his nose all the way around the perimeter of the Enrichment Park. 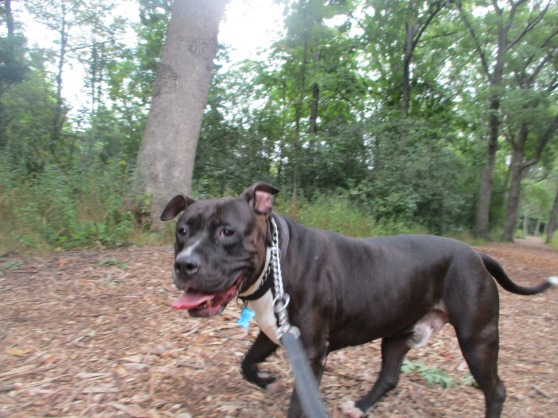 Reno sniffed at a squeaky toy but wasn’t too interested in chasing after it on this particular outing. He gets along with other dogs and attends play group a couple times a week. Even though he might seem like the rough-and-tumble type, Reno’s actually pretty mellow with the other dogs. Stop by the shelter soon to see if Reno is the one for you!

Joan the eleven-month-old Shepherd mix has lots of puppy playfulness. She loves toys and playing fetch, either with a person or with herself. She also enjoys going to play group and being with the other dogs. Joan is speedy, so she prefers playing tag (either being the chaser or the chased). Joan has attended some off-site events and enjoys all of the attention she gets. 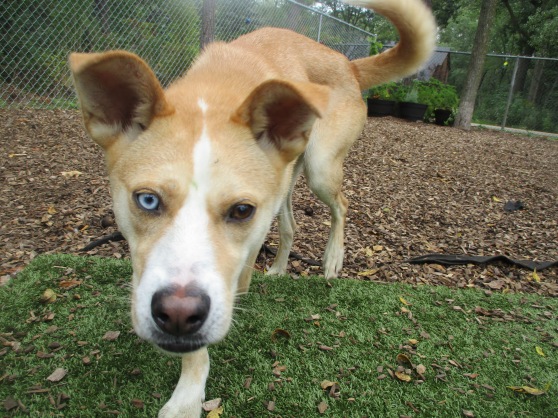 Joan is also affectionate. She likes to give doggy hugs and will happily stand on her back legs for as long as you keep petting her. She gives the occasional doggy kiss too. Joan especially likes getting scratched on her sides and will snuggle up against you when you kneel down to her level. Joan walks nicely on the leash and rarely pulls. If you’re looking for a sweet puppy, come in soon to meet Joan!

Joan is slim and agile

I also saw Blush, Chance, Sox, and Turbo (who is talkative in his kennel, but really calms down once he’s out on the trail and away from the other barking dogs).