Orphans of the Storm® Dogs Can Brighten Up a Rainy Day

This week’s pictures aren’t the best because the dogs at Orphans of the Storm® and I got caught in the rain! Nobody seemed interested in extending their outdoor time longer than necessary. But even on a dreary day, these dogs will definitely be able to put a smile on your face.

Tahini the three-year-old Pit Bull Terrier mix is happy, playful, and snuggly. She gladly leaned against my legs so I could pet her and gave me doggy kisses whenever I knelt down to her level. Tahini loves playing with toys, whether it be playing fetch with a person, throwing it in the air herself, or lying down and chewing. She enjoys a mix of stuffed squeaky toys and rubber bouncy balls. Tahini walks nicely on the leash, though she mostly wanted to run on this particular day to dodge the raindrops.

Tahini taking a break from romping around the Enrichment Park

Where Tahini really shines is in play group. She is a play group rockstar and also a designated “helper dog,” which means she plays with dogs who need to better develop their doggy socialization skills and teaches them proper play group etiquette. She’s gotten along with every dog she’s met so far and can adjust her play style to match that of her playmate. If you’re looking for a sweet dog who loves to play with people and other dogs alike but will cuddle with you at the end of the day, be sure to meet Tahini on your next visit to the shelter! 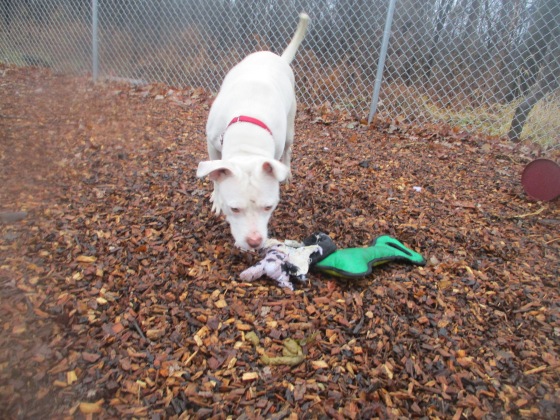 Tahini choosing which toy to play with

Peanut the two-year-old Pit Bull Terrier mix (who you have previously seen me call Phat in my play group summaries, but that name was confusing people!) is energetic and upbeat. She enjoyed exploring around the off-leash run but came back to me often to get pet. Peanut has a cuddly side and scooted underneath my knees when I was sitting on the bench so I could pet her more. She later hopped up and joined me on the bench.

Peanut is a little cutie

Peanut likes to lead the way on walks and can be a little strong, so it might be best for her future family to walk her with a harness. She attends play group regularly and likes to actively play with the other dogs, so she could go to a home with or without another dog. She could also go to a home with children. Come in soon to see if Peanut is the pooch for you!

Cooper the three-year-old Beagle mix can be a little shy at first, but warms up very quickly and loves getting pet. He’ll happily stand by your side as long as you keep petting him. Cooper enjoys following his nose around the yard. He is also an easy walking companion because he goes at a meandering pace so he can catch even more interesting scents. He didn’t pull on the leash at all. When I sat down on the bench, Cooper put his front paws up next to me.

Cooper used to live with children, dogs, and cats. However, he still has his Hound genes and thought the family chickens were for hunting rather than observing. So, he could go to a home with children and other dogs or cats, but no birds. Cooper prefers being with just one or two dogs rather than larger play groups, and also prefers if those other dogs are closer to his size. If you’re looking for a family dog, be sure to say hello to Cooper on your next visit to the shelter!

Cooper joining me on the bench