Today and tomorrow (December 13-14), Orphans of the Storm® is participating in the BISSELL Pet Foundation Empty the Shelters Holiday Hope event. Adoption fees will be waived for dogs and cats 6 months and older. If you’ve been debating bringing home a new furry family member before the holidays, now is the perfect time!

Rooster the one-year-old Mountain Cur mix is always super excited when he realizes it’s his turn to come out for a walk. He gave me several thankful doggy hugs once he was out of his kennel (and a few nibbles on my fingers, but he is still a puppy after all). Rooster had a great time expending his energy by romping around the Enrichment Park, chasing after toys, and racing a dog on the other side of the fence.

Rooster leading the way on our walk

Rooster settles down nicely for walks, though. He’s an easy (but quick-paced) walking companion. Rooster also joined me on the bench and gave me lots of gentle doggy kisses. He is definitely a cuddler. Rooster gets excited when he passes other dogs on walks, but that’s because he loves playing with his doggy friends in play group. If you’re looking for a happy and playful puppy, come in soon to meet Rooster!

Rooster coming over for a snuggle

Poochie the two-year-old American Bulldog mix is going to be a loyal companion to his new person, because he is so attentive! When I was walking him on the leash, he would look up and check in with me often, as if he were saying, “This is okay? We’re on the same page, right?” And we always were! Poochie is a great walking buddy and very well-mannered. 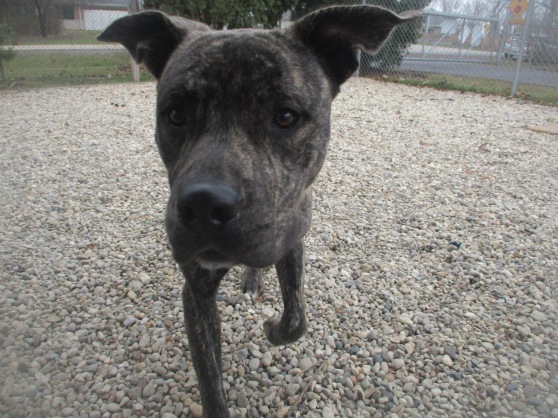 Poochie has a super-cute face

Poochie enjoyed exploring around the off-leash run but came back to me often. He particularly likes getting his back and hips scratched, but any attention is welcome. Poochie is a play group regular and enjoys being with the other dogs. He’s made a couple doggy friends who he especially likes to romp around with. Poochie is a super handsome boy. Be sure to say hello to Poochie on your next visit to the shelter!

Carlos the two-year-old American Bulldog mix will immediately put a smile on your face, and that smile will only grow the longer you spend with him. He is so happy, silly, and snuggly. Carlos loves to give doggy hugs and doggy kisses–but he can jump up pretty high in the process, so watch out that he doesn’t boop your nose. Carlos is one of the few dogs I’ve seen who will turn down a treat and give the person doggy kisses instead. He particularly likes getting his hips scratched and will lean so far into you that he almost topples over.

Carlos is basically a giant puppy

Carlos loves playing with toys. Tennis balls, rubber balls, stuffed toys–whatever happens to get his attention. He’ll happily carry them in his mouth while he runs around the yard, takes a walk, or gets pet. On walks, Carlos prefers running to walking and can pull a bit if you’re not keeping up with him. Carlos gets along great with other dogs (though some bigger males aren’t as fond of him) and is a play group regular. Come in soon to see if Carlos is the dog for you!

Einstein the four-year-old German Shepherd mix is a smart boy, as his breed is known to be. He already knows “sit” and “shake” and maybe even more–and if he doesn’t know it yet, he’ll be eager to learn! Einstein likes to lead the way on walks but doesn’t pull too much. He was also fine with taking the occasional break to get some pets.

Einstein is pretty new to the shelter, so he was a little anxious when we were out and spent most of his time in the Enrichment Park standing by the gate and watching who walked by. He did eventually run back and forth a couple times to expel some of his energy and had a doggy smile on his face while he did so. If you’re a German Shepherd fan, come by the shelter soon to meet Einstein! 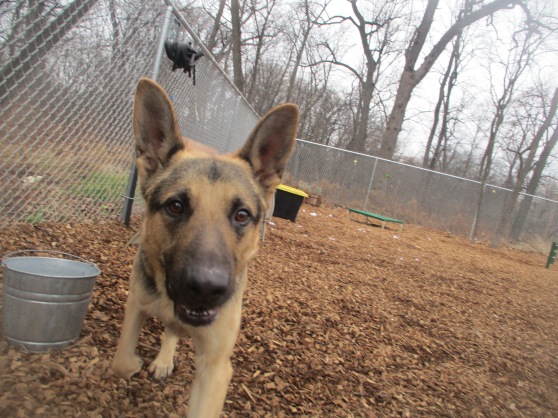 I also saw Peanut and Red, and played with not-yet-profiled puppy Ruby (who loves to get belly rubs and is very nice about letting go of toys when you ask her to).

Most play groups were cancelled this week due to the cold weather, but I was able to get in some extra walks with Barney, Jupiter, Polly (who is attending weekly obedience classes and already graduated to Level 2), and Turbo.

4 thoughts on “Orphans of the Storm® Dogs Have Holiday Hope”