The first week of Orphans of the Storm®’s reopening was a great success, with nearly two dozen dogs finding their forever homes! There are still plenty more who are eager to find their new family, so please call 847-945-0235 to make your appointment.

King the five-year-old Pit Bull Terrier mix was recommended to me by three different volunteers, so I knew I had to meet him! They all told me how sweet and handsome he is, and now that I’ve spent some time with him, I agree. King likes to give the occasional doggy kiss and loves getting pet. He has a tickly spot on his left side and kicks his back leg while you scratch it, but stands still and gives you a big doggy smile when you scratch his right side. 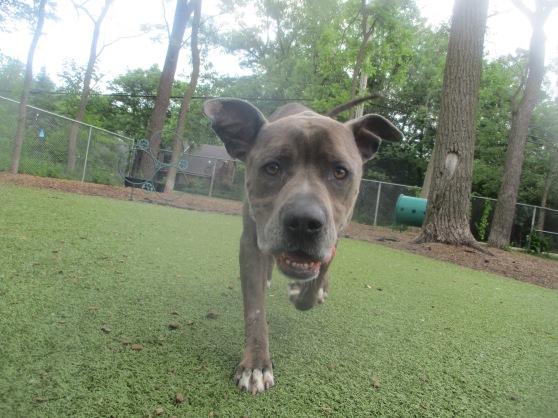 King’s ears flapping while he romps

King walks nicely on the leash when using a front-clip harness. He likes to stop and sniff at different trees and clumps of grass, but overall walks at a good pace. King has a fun time romping around the Enrichment Park and will happily chase toys you throw, but isn’t always interested in picking them up and bringing them back. King would do best as the only dog in his kingdom and is looking for a home where he can be the only pet. Stop by the shelter soon to meet King! 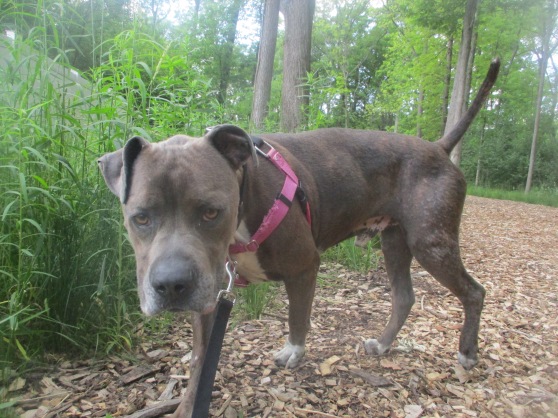 King being a good walking buddy

Wayde the two-year-old Pit Bull Terrier mix arrived at the shelter nervous of his new surroundings, but he has made lots of friends with the staff and is now making more friends with the volunteers. Once Wayde feels comfortable with you, he’ll climb right into your lap and roll over for a belly rub. He particularly likes getting his sides scratched. You’ll also win him over quickly if you give him treats! 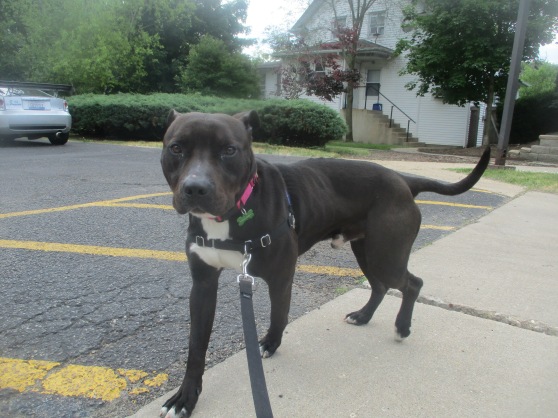 Wayde has the sweetest facial expression

Wayde walks great with a front-clip harness. He doesn’t pull at all and walks at an easy-going pace. Wayde likes stuffed toys and sometimes wants to carry them on his walks. He kept going back to a stuffed sloth toy in the Enrichment Park, poking it with his nose and sniffing it, and eventually decided that was the one he wanted to carry. Wayde attends play group regularly with the calmer, gentler dogs and has potential to go to a home with another mellow dog. Come in soon to meet Wayde! 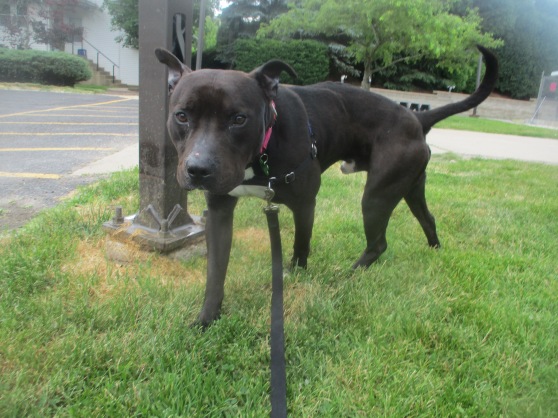 Wayde enjoying the cool grass under his paws

I also saw Chevy, who had no interest in walking on this hot day but curled up next to me in the grass to enjoy some fresh air and sunshine.