A little snow doesn’t put a stop to how much the dogs at Orphans of the Storm® want to cuddle! There are so many super-affectionate dogs available right now. You’ll fall in love with at least one!

Scooby the three-year-old Shepherd/Labrador Retriever mix absolutely loves toys. He enjoys playing fetch, though it might be best to have two tennis balls handy because he loves them so much he doesn’t want to drop the one he currently holds before chasing after the next one. He even tries to fit two tennis balls in his mouth simultaneously, though I haven’t seen him succeed yet. Scooby will happily lean against your legs or try to sit in your lap while chewing on his toys. He particularly enjoys getting his ears and hips scratched.

Scooby sniffing in the snow

Scooby is a nice leash-walking companion. He rarely pulls and walks at an easy pace. Scooby would fit in well in a variety of homes. He attends play group approximately every other day and gets along with the other dogs. He also has the potential to live with children and cats. Stop by the shelter soon to meet snuggly Scooby! 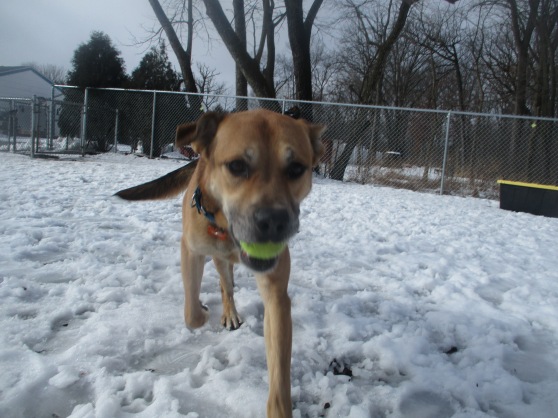 Scooby with his tennis ball (sorry it came out blurry!)

Bailey the eight-year-old Boxer mix already has years of experience living in a home. She’s housebroken and enjoys going for car rides. Bailey is very cuddly and loves getting her hips scratched. She does a little happy dance and turns around to give you a doggy smile when you’re petting the right spots. Bailey is also cat-like in that she enjoys rubbing her whole body against you when she walks by.

Bailey is happy to stay warm with a cute sweater

Bailey enjoys having a yard to romp around in. She’s also good at walking on the leash and likes going for walks. When walking by other dogs, she’ll bark if the other dog barks first, but is quiet if the other dog is quiet. Bailey has shared her kennel with a couple other dogs and is currently sharing with Meshai (see below), and she also participates in play group. However, she likes to be the queen bee in her home and would do best as the only dog. Come in soon to see if Bailey is the one for you!

Rhino the two-year-old Pit Bull Terrier mix has become an instant volunteer favorite. Every other volunteer I’ve talked to is in love with him, and I am too! Rhino unfortunately got off to a bad start in life and was found tied to a tree. He’s missing some fur around his neck from this, but otherwise you would have no idea he’s had it rough. He is so happy, friendly, and playful. Rhino loves to give doggy hugs and doggy kisses, and appreciates receiving lots of pets in return. 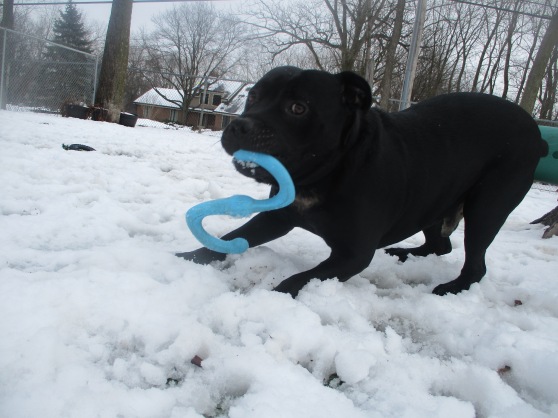 Rhino loves toys. He can keep himself entertained for a long time by holding a toy in his mouth and happily romping around the yard. Sometimes he’ll lay down and chew on the toy for a bit, then get back up and start romping again. Rhino is also super easy to walk on a leash. He attends play group and has gotten along with every dog he’s met so far. We’ve all seen what a gem Rhino is, and hope you’ll see it too! 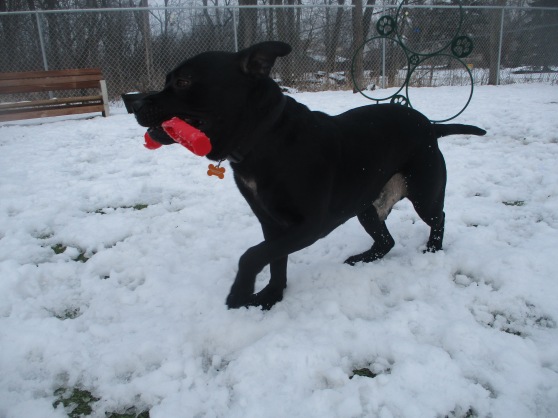 Rhino thought the tennis ball thrower was a toy too

Meshai the one-year-old Pit Bull Terrier mix arrived at the shelter in rough shape (skinny and missing some fur), but we’re making sure he gets better! He’s nervous and shy right now, and needs some convincing to leave his kennel. Once he’s out, though, he’s very gentle and sweet. Meshai is a little uncertain about getting pets and might pull away at first, but he gets more comfortable the longer he’s out and even starts to enjoy getting pets eventually.

Meshai was a little uncertain about the cold

Meshai really perks up when he’s around other dogs, though. He’s currently sharing his kennel with Bailey (see above) and he also attends play group. Meshai likes to actively play with the other dogs, and hops around energetically with his tail wagging. He might feel more comfortable going to a home with another nice dog who can show him the ropes. Come in soon to meet Meshai! 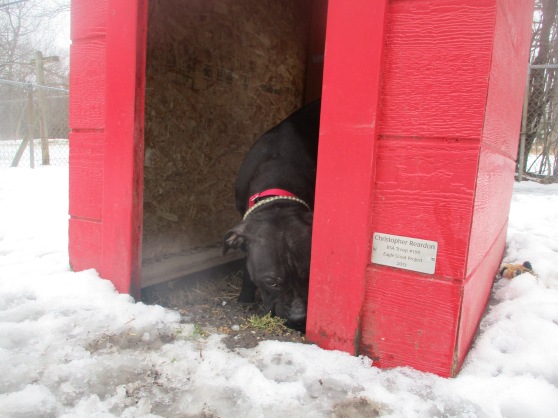 Meshai already knows how to use a doghouse

I also saw Badger (who is walking much better now than the first time I took him out, though he still doesn’t want to go all the way around the trail), Cocoa, and Rascal, as well as a quick walk with the not-yet-profiled Dusty (who is a super easy walking buddy). I also took Princess for a walk, and at every single bench we passed, she hopped up, sat down, and waited expectantly for me to get her lots of pets and kisses.