There are lots of sweet and snuggly dogs ready to meet you at Orphans of the Storm®! Here are just a couple.

Sonny the one-and-a-half-year-old Staffordshire Bull Terrier/Labrador Retriever mix can be a little bark-y and jump-y in his kennel, but he melts into a puddle of sweetness as soon as he gets his leash put on. He gave me a doggy hug and doggy kisses right away, and wasn’t even that interested in walking! He just wanted to climb into my lap and get pet. One kiss is definitely never enough for Sonny!

Sonny has the happiest smile

Sonny is a nice walking companion. In fact, he wants to be so close to his person that sometimes he was walking between my legs rather than to my side. Sonny enjoys rolling around on his back in the grass but will also lay still for you to give him belly rubs. Sonny needs a little more practice learning how to be a dog, because he seemed a little nervous when I started tossing toys for him to chase and didn’t know what to do with them. But this young pup is eager to learn. Be sure to say hello to Sonny on your next visit to the shelter!

Sonny got a little muddy but didn’t mind

Harper the two-year-old Australian Cattle Dog/Labrador Retriever mix likes people of all ages, including children. She’s already gone to Orphans of the Storm®’s Northbrook Court location and loved getting attention and pets from everyone who stopped in. Harper loves water and enjoys stretching out in the puppy pool. She also liked splashing in puddles from the recent rain when we were on our walk. Maybe her future home will include a pool or a lake! 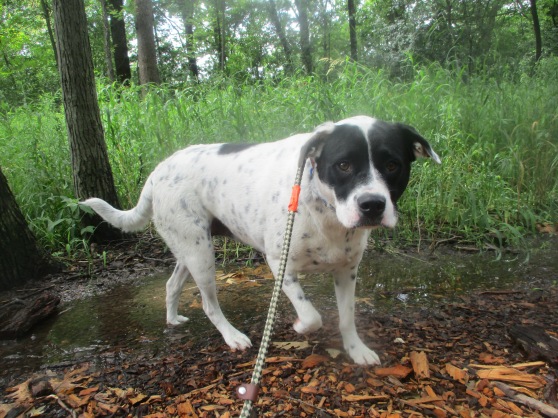 Harper getting her feet wet

Harper is well-mannered. She sat nicely for me without even being asked, and is a good walking companion. She likes to give doggy hugs and the occasional doggy kiss. Harper gets along with other dogs and has become a play group regular. Sometimes she just enjoys sniffing on her own, and sometimes she likes to tumble around with the others. Come in soon to meet Harper!

Harper showing her serious side

Everyone’s hiding their faces! But we have Dennis (I think), Snickers, Huckleberry, Magic, Henry, and Lucy

Dennis (I think) and Snickers

There were also a few dogs who haven’t made it on the website yet (it’s still under construction but will be updated soon!) like Henry, Magic, PB&J, Rose, and Tiny. 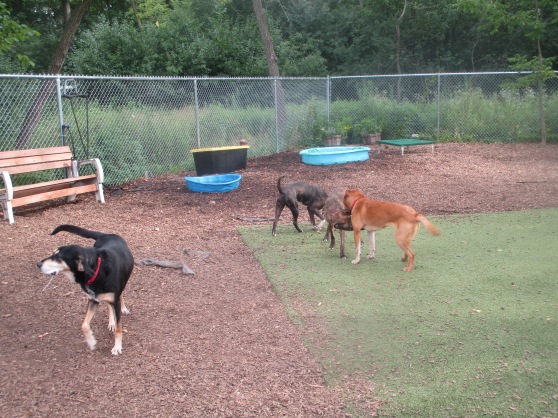 You can find dogs of all colors at Orphans of the Storm® but this week I happened to walk mostly black-and-white ones!

Max the two-year-old Border Collie/Hound mix is super gentle. When I took him out of his kennel, he patiently waited for his leash to get put on. (When I took him out for play group a couple days later, he started jumping up and down in excitement when he realized it was his turn to come out–but was still easy to hook up.) Max mostly kept to himself when he was exploring the off-leash run, but came back to me every once in a while for a quick pat.

Max is such a sweetheart

Max is a great leash-walking companion. He didn’t pull at all, and walked at an easy pace. When I stopped to pet him during our walk, he gave me a couple doggy kisses. Max doesn’t pay much attention to dogs he passes on walks. He attends play groups and is very mellow with the other dogs, just sniffing hello but not actively playing too often. Come in soon to meet Max!

Max staying cool in the shade

Eddie the one-and-a-half-year-old Pomeranian mix looks like a baby arctic fox (in its summer coat). He can be a little skittish with new people and would prefer having a few minutes to get comfortable before you start petting him. But once he does feel comfortable, he particularly likes getting scratched on his hips and does a little dance when you scratch the right spot. 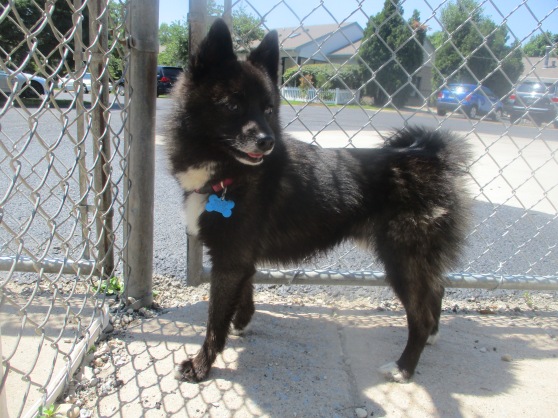 Eddie likes to lead the way on walks but rarely pulls on the leash. He gets along with dogs his size and is currently sharing his kennel with four other little dogs. Eddie has participated in play groups and is also polite when sniffing dogs he passes on walks. This small pup is ready to find his loving forever home. Be sure to say hello to Eddie on your next visit to the shelter! 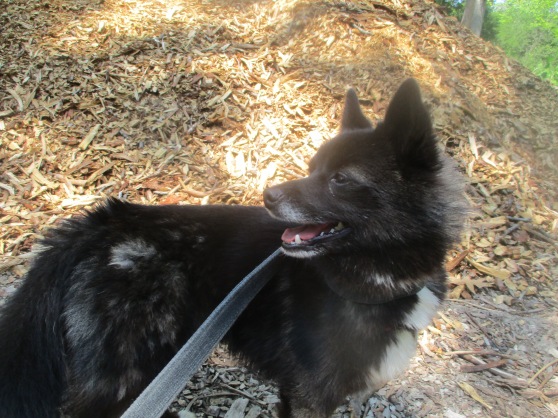 Eddie is a little ball of fluff

Leia the two-year-old Collie mix was very shy when she arrived at the shelter, but is coming out of her shell more and more as she makes new friends–both human and dog! Although Leia was nervous about going to play group the first few times, she is now a play group regular and enjoys frolicking with the other dogs.

Leia smiling for the camera

Leia walks nicely on the leash. She pauses to sniff every once in a while, but mostly goes at an even pace. Leia likes rolling around on her back when she finds a good spot for it (in this case, a damp spot hidden under woodchips that she pawed away). When she’s rolling around, she’ll happily lay still for a bit to get a nice belly rub. Come in soon to meet Leia!

I also saw Barney and Reeco.

There have been many dog adoptions at Orphans of the Storm® over the last couple of weeks, so I only have two new guys to write about today. But there are still many more eager to meet you and enjoy the rest of their summers (and lives!) in a new forever home.

Buddy the nine-month-old Staffordshire Bull Terrier mix is an energetic pup. When we went around the woodland preserve trail, Buddy was much more interested in running than walking–so if you’re looking for a new friend to motivate you to exercise, Buddy could be your guy! However, when Buddy was off-leash in the Enrichment Park, he was much more mellow and enjoyed meandering around and sniffing. After he did some exploring on his own, Buddy came back to me to get some snuggles. 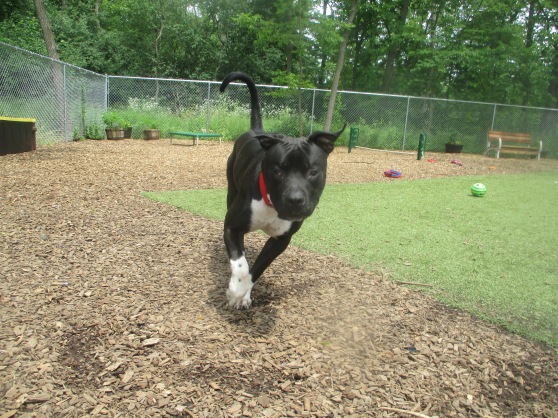 Buddy’s ears act as little wings when he romps

Buddy is still a puppy, so he would benefit from training. He seems eager to learn, though! When I practiced the “sit” command with him, he did it faster each time. Buddy also gets along with other dogs and participates in play groups. Sometimes he’s in a more playful mood, and other times he’s calmer. If you’re looking for a fun pooch to join your home, come in soon to meet Buddy! 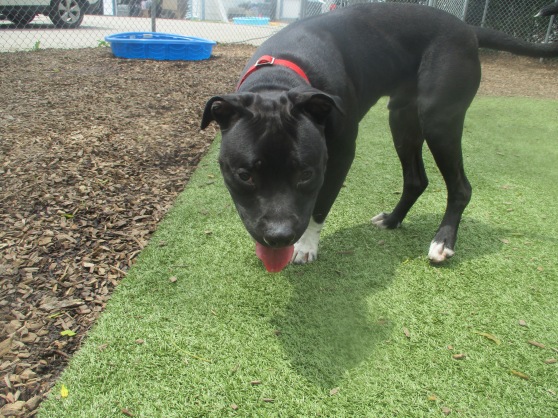 Buddy not so sure about the heat

Roscoe the two-year-old Staffordshire Bull Terrier/Shepherd mix must have gotten some training at some point, because he very politely sat while I put his leash on and also sat to wait while I opened the door to the shelter hallway–without being asked! Roscoe is also easy to walk on the leash. In fact, he moves at a pretty slow pace during his walks because he’s interested in doing lots of sniffing. It was hard to get a picture of his adorable face because his nose was always to the ground! 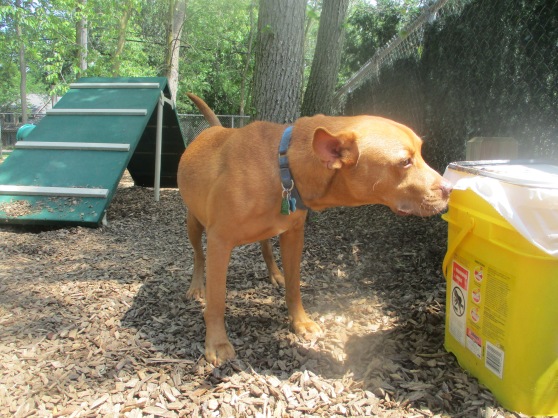 Roscoe will sniff all the things!

Roscoe enjoyed snuffling his way around the Enrichment Park. He watched me throw a toy but didn’t seem too eager to chase it or bring it back to me. Roscoe is an easy-going pooch who gets along with other dogs as well as cats. He attends play groups and even does well with some of the dogs who are more selective about their playmates. Whether you’re looking to add to your furry pack or just want one, be sure to say hello to Roscoe on your next visit to the shelter! 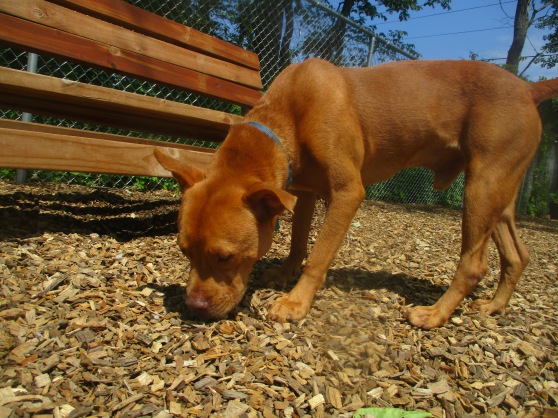 Roscoe has such a pretty fur color