Orphans of the Storm® recently opened its Highland Park location, so we are having an open house on Saturday, October 22 from 10am-4pm! There will be a number of dogs and cats eager to meet you, and adoption fees will be waived if you adopt during the event. Click here for more details. But if you don’t find the furry friend you’re looking for at the Highland Park location, there will still be dozens more waiting to meet you at the shelter’s main location in Riverwoods.

Bob the eleven-year-old Staffordshire Bull Terrier mix doesn’t act like a senior dog, so don’t get turned off by his age. He’s a sweet boy who loves being with people and also loves going for walks. When we were in the off-leash run, Bob alternated between sniffing in the bushes and snuggling with me. He gave me a couple doggy kisses, too.

Bob romping in the run

Bob really perked up when we went to the woodland preserve. You can tell when a dog is really in his element, and that was Bob on the trail. He walked at the perfect pace and always had his head up, so he looked like he was prancing. Bob would do best as the only dog in his new home. If you’re looking for a great walking companion and a lovable senior, come in soon to meet Bob! 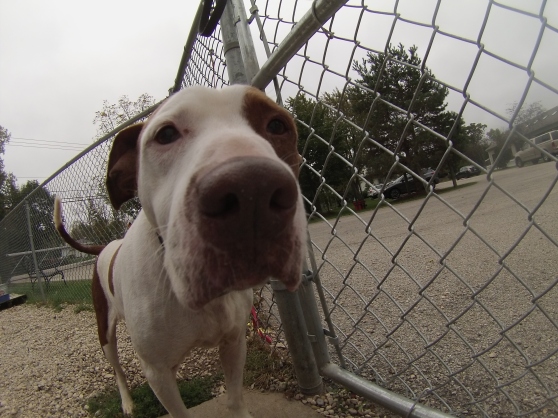 Bob says, “Whatcha got there?”

Tyson the two-year-old Staffordshire Bull Terrier mix is a fun boy. I first met him last week when he was out with another volunteer, and Tyson hopped up on the bench next to me and covered my face in doggy kisses as if we were old friends. When I took Tyson out myself this week, he was happy to join me on the bench again but didn’t stay for long because he was eager to romp around.

Tyson is always ready to cuddle

Tyson was found as a stray, but must have been with a person at some point because he sat when I asked him to, and then immediately stuck out his paw to shake without any prompting. He’s an athletic and energetic dog who would make a good running partner, based on how we made our way around the woodland trail. Stop in soon to see if Tyson is the one for you!

Tyson has such a sweet (big) face

Shaylon the three-year-old Foxhound/Beagle mix is extremely affectionate. When we got to the woodland trail, I expected Shaylon to act like every other Hound and just follow his nose. Instead, all he wanted to do was cuddle! When I knelt down next to him to take his picture, he climbed right into my lap. When I sat down on a bench, he hopped up next to me and put his front paws on my legs. 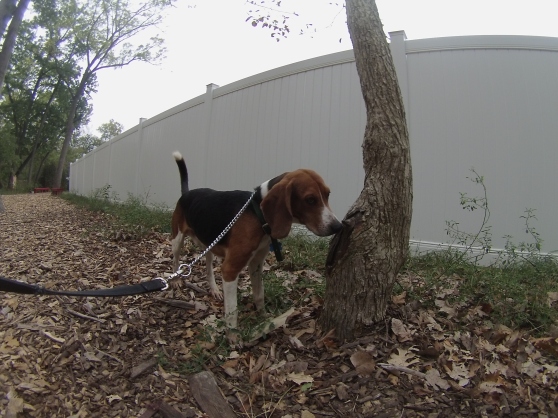 Shaylon sniffing in the woodland preserve

Shaylon even tried to stop me from walking by standing on my foot! He also had no issues with me picking him up. We eventually got into a good walking rhythm and Shaylon did well on the leash. He barked a bit when he first got out of his kennel (and he has that signature Hound howl), but didn’t make a peep after that. If you’re looking for a cuddle buddy, come in soon to meet Shaylon!

Shaylon being a lapdog

Minnie the four-year-old Shepherd mix is super sweet and friendly. When I first came to her kennel she was looking a little sad, but when she realized it was her turn to come out, her tail slowly started wagging and eventually she was wriggling all over. She immediately gave me a doggy hug once she had the leash on and continued to want to cuddle the entire time we were out.

Minnie is enthusiastic and will basically launch herself into your lap whenever she gets the opportunity. Whether I was kneeling on the ground or sitting on the bench, Minnie came running over and tried her best to curl up next to me. Minnie walked nicely on the leash when we went around the woodland trail and would often look up to check in with me. Be sure to say hi to Minnie on your next visit to the shelter!

Minne about to join me on the bench

Andy the two-year-old Bloodhound/Labrador Retriever mix (not to be confused with the other Andy) is a big, strong boy who is also a big sweetheart. One of Andy’s favorite things is tennis balls. He will happily chase one down if you throw it, but then he’ll just carry it around in his mouth and chew it. He’ll also occasionally drop it and kick it around with his front paws, which is adorable and also convenient in that he can play fetch without a person! Andy enjoys getting plenty of attention and will gladly stay by your side as long as you’re petting him.

Andy loved his tennis ball so much that he carried it all the way around the woodland preserve. He was even about to bring it back to his kennel with him, but dropped it just outside the door. Andy, being a Bloodhound, loved being in the woods and walked at a quick pace–so quick that even though it was a walk for him, it was a jog for me. If you’re looking for an active playmate, stop in soon to meet Andy!

Andy is so handsome

I also saw Bella, Candice, Diamond, Lucy, the other Lucy, and Snuffles.

There are a number of dogs at Orphans of the Storm® who are a year or younger. If you’re looking for a young pup to join your family, come in soon to meet them!

Ophelia the one-year-old Foxhound mix is one of the most snuggly dogs you will ever meet. In fact, we never even made it to the off-leash run because all Ophelia wanted to do was snuggle instead of walk. She is an expert at giving doggy hugs and is convinced she’s a lapdog even though she’s a little too large to fit entirely. Ophelia also loves getting belly rubs and probably would have stayed lolling in the grass for hours if she had the chance.

Ophelia says, “Excuse me, why did you stop rubbing my belly?”

Ophelia came from an owner who mostly kept her in the yard, so Ophelia doesn’t have much experience with leashes and will need some leash training. She also seems a little nervous and insecure, so she will need plenty of TLC to help her come out of her shell and make her feel comfortable in her new home. Stop in soon to meet Ophelia!

Ophelia being a lapdog

Billy the seven-month-old Beagle mix has plenty of that puppy energy. He did his Beagle thing and followed his nose everywhere around the off-leash run, but did so with a run-and-stop method rather than casually walking. Billy’s tail was always pointing straight up and wagging.

Billy was eager to go around the woodland preserve. He pulled on the leash occasionally when he wanted to follow his nose in a particular direction but overall did pretty well, considering he’s still young. Billy is currently sharing his kennel with another dog, so he could go to a home with or without another furry friend. Come in soon to see if Billy is the pup for you!

Billy keeping an eye on things

Stemi the six–month-old Mountain Cur mix is an active and energetic pup. He was jumping up and down in excitement when he realized it was his turn to come out. Stemi led the way to the off-leash run and happily scampered around. Stemi likes to know what’s going on with everyone, so he was trying his best to look over and through the fence at the other run.

Stemi says, “Hey, what’s going on over there?”

Stemi likes to show his affection by giving doggy hugs. When I saw him out later with another volunteer, Stemi came running over and jumped right up to hug me. He’s also one of those dogs whose entire body wiggles when he’s happy. Stemi is sure to put a smile on your face. If you’re looking for a fun-loving young dog, be sure to say hi to Stemi!