Orphans of the Storm® will be closed Monday for Memorial Day, but open regular hours (11am-5pm) Saturday and Sunday. You still have time to welcome a new furry family member into your home before the holiday!

Molly the four-year-old Black and Tan Coonhound mix is the sweetest! All she wants to do is snuggle with the nearest person. Instead of exploring around the Enrichment Park, Molly spent her time giving me lots of doggy hugs and attempting to climb into my lap. When someone walks up to pet her, she wants to be as close as possible and will try to sit on their feet.

Molly has the floppiest ears

Molly walks nicely on the leash and occasionally stops to sniff, but not as much as you might expect from a Hound. She’s currently sharing her kennel with a little Beagle, so she could go to a home with or without another dog. She also goes to play group, but gets a little overwhelmed in large, active groups and prefers just a quick sniff hello before moving on. If you’re looking for a great cuddle companion, be sure to say hello to Molly on your next visit to the shelter! 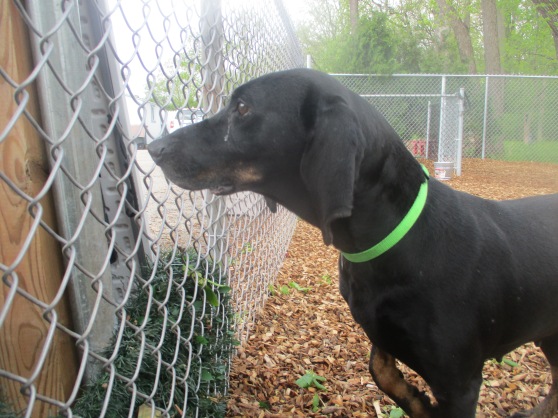 Molly always has the sweetest look on her face

Spike the ten-month-old Staffordshire Bull Terrier mix came from an owner who didn’t have enough time for him, but that means he already has experience living in a home and is ready to find his forever one. Spike is very calm for a puppy! Even though he could throw his weight around if he wanted to, he actually walks great on the leash. He’s more of a meanderer and likes to take his time sniffing. 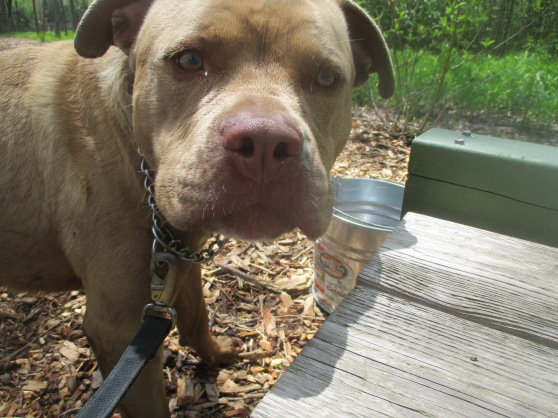 Spike has participated in a couple small play groups with well-socialized dogs who have been teaching him proper play group etiquette. Spike is a quick learner but may still be too exuberant for some dogs, and may do best as the only dog in his new home. Spike has quickly become a volunteer favorite because of his happy personality. Come in soon to meet Spike!

Spike is surprisingly floofy for his breed

Reggie the one-year-old Labrador Retriever mix has lots of energy! Reggie ran a few laps around the yard before slowing down to sniff and explore. He wasn’t overly interested in playing fetch, but poked some of the toys with his nose. Reggie politely sniffed Clyde when they were on opposite sides of the fence, as well as when we passed Clyde on leash during our walk around the woodland preserve.

Reggie likes to take breaks from romping around in order to get pet. He put his front paws in my lap on multiple occasions so I could scratch his neck and ears. Reggie likes to walk at a quick pace, but doesn’t pull on the leash too much. He has a great doggy smile and always looks happy. Stop by the shelter soon and say hello to Reggie!

Stevo the two-year-old Chihuahua/Jack Russell Terrier mix is a little shy and nervous right now. He wasn’t so sure about coming out for a walk, so I sat in his kennel with him for a couple minutes to give him time to get comfortable with me. Then we were on our way! Despite his hesitation, Stevo is great at walking on the leash. He was always either right by my side or just a couple steps ahead.

Stevo is too cute for words

Stevo prefers having a chance to sniff a person before you start petting him (which is what you should do for all dogs anyway!) but will stand politely once you do pet him, and won’t start walking again until you stop. Stevo is looking for an understanding home with people who will help him come out of his shell. If that sounds like it could be you, come in soon to meet Stevo!

Stevo on the move

Thea the two-year-old Staffordshire Bull Terrier mix is super affectionate. She loves to give doggy hugs and doggy kisses, and will try to climb into your lap whenever the opportunity presents itself. Thea was a little shy when she first arrived at the shelter, but she has made a lot of progress and now wags her tail at everyone and wants to say hello.

Thea sometimes rocks the “one ear up, one ear down” look

Thea walks pretty well on the leash, but can be a little reluctant sometimes and needs encouragement to keep going. Once she’s settled and comfortable in her new neighborhood, she’ll probably do just fine! Thea attends play groups and mostly kept to herself at first, but has recently started engaging with other dogs and is showing more of her playful side. Stop by the shelter soon to see if Thea is the pooch for you! 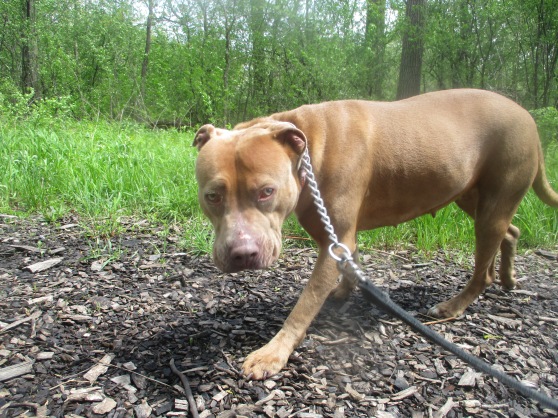 Cocoa the three-year-old Labrador Retriever/Staffordshire Bull Terrier mix is very energetic and playful. She gets super excited when she realizes it’s her turn to come out for a walk and can pull on the leash a bit, but eventually settles down (though she still prefers to walk at a quick pace). Cocoa loves toys more than anything! Balls, squeakers, ropes–you name it, she’ll play with it! This means she’s also great at playing fetch.

Cocoa loved this ball the most

Cocoa is also cuddly and affectionate. She combines her love of people and toys by snuggling on her person’s lap while chewing her toy. Cocoa participates in play groups and has a rambunctious play style. She has also completed Level 1 of obedience training and has graduated to Level 2. If you’re looking for an active, playful dog who will also snuggle with you at the end of the day, be sure to say hello to Cocoa!

Cocoa was hopeful that the camera was also a toy