At the beginning of last weekend, over 100 dogs were listed as available for adoption on the Orphans of the Storm® website. By the end of Clear the Shelters weekend, that number was below 50! Although a 100% cleared-out shelter is always the goal, over 50% in one weekend is amazing. There were also 32 cats adopted on Clear the Shelters day alone, and 58 total in the past week.

Thank you to all of the staff and volunteers who worked through a hot and humid day to make sure so many dogs and cats found their forever homes. And an even bigger thank you to those who came to the shelter and left with a new furry family member! You can find some adorable family photos on the Orphans of the Storm® Facebook page.

Whether you adopted your pet from Orphans of the Storm® five days ago or five years ago, we would love to hear from you! If you would like to share your adoption success story, please email meetthepooches@gmail.com. You can read previous adoption stories on the Success Stories page.

Below are just a few photos from the event. There are many more on the Facebook page! 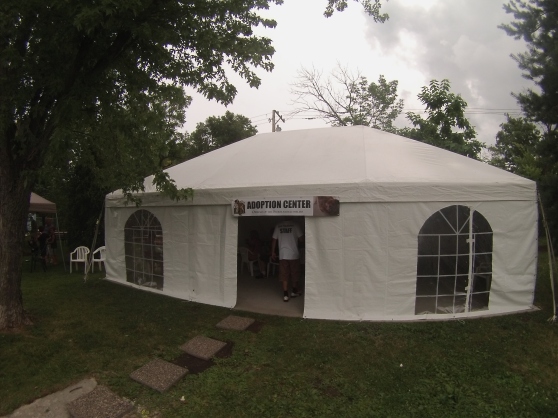 Staff from both of our veterinary offices were on site, helping to answer adopters’ questions and pass out goodies! 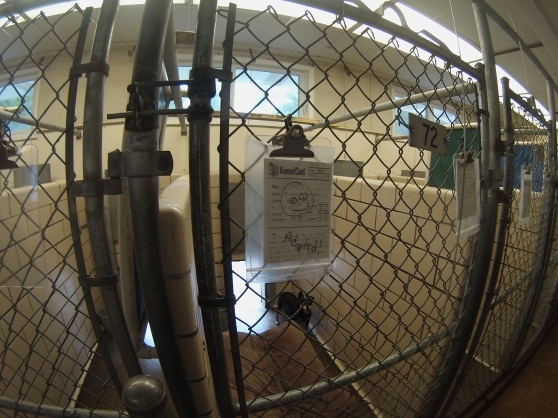 Hurray for long-timer Gypsy, who went home this week! 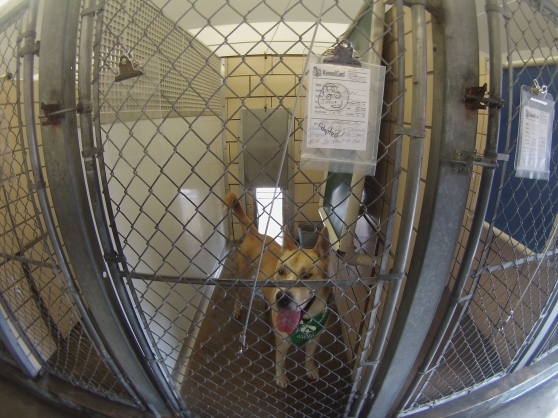 And so did handsome Blondie, who will also have a doggy friend to play with at home!

There are still plenty of dogs and cats at the shelter, ready and waiting to go to their forever home. If you weren’t able to make it to the event last weekend, come in any day of the week and meet them! Orphans of the Storm® is open daily from 11am-5pm, with extended hours on Thursday (11am-8pm). The animals hope to see you there soon!

Don’t forget: This Saturday, July 23 is the day to Clear the Shelters at Orphans of the Storm® and other animal shelters all around the country. Orphans of the Storm® was featured on the NBC 5 Chicago news to help promote the event! The $90 adoption fee for animals 5 months and older will be waived; other fees may still apply.

Adopting a shelter pet is always a good deed, but adopting a long-timer is extra-good! Here are some of the shelter’s dogs who have been waiting more than their fair share for a new home, which they will hopefully find this weekend:

And here are some newer dogs who will also be eager to meet you on Saturday!

Mila the five-year-old Australian Cattle Dog mix came to the shelter with heartworm, but she’s finished her treatment and now she’s ready to go home. Volunteers have come to know her well and often walk her around the woodland preserve. She walks nicely on the leash and enjoys the occasional stop to sniff around. Mila has pretty coloring and fluffier fur than most Cattle Dogs I’ve met.

Mila keeping an eye on things

Mila spent most of her time following her nose and exploring underneath the bushes while we were in the off-leash run. She politely sniffed the dog on the other side of the fence but otherwise didn’t pay it much attention. She stopped by my side every once in a while for a pat on the back or a scratch behind the ears. Mila would do best in an adults-only home. If you think that home might be yours, come in soon to meet Mila!

Mona the three-year-old Greyhound/Labrador Retriever mix is the absolute sweetest. As soon as I took her out of her kennel, she jumped up and literally hugged me with her front paws, as if she was saying, “Thank you for taking me out. Please bring me home with you. I love you already!” We couldn’t even walk for a while, because every time I tried to move, Mona would keep clinging to me. I assured her she would be just fine. 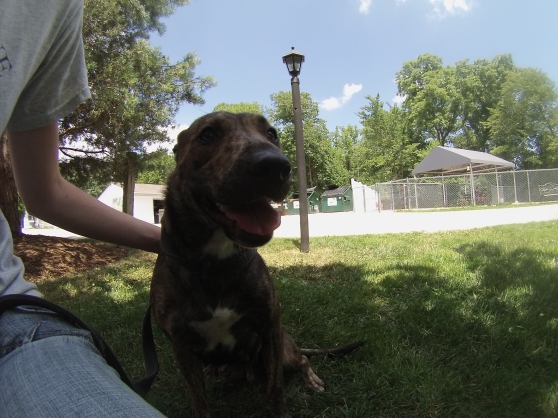 Mona won’t stray far from your side

Mona is super snuggly and affectionate. We eventually made our way to a shady spot in the grass and Mona rolled over for a belly rub, half in my lap and half on the ground. She licked my arm while I pet her. Later, she fully climbed into my lap and gave me lots of doggy kisses. It was a little heartbreaking to put her back in her kennel because she started clinging to me again, but I know a dog as sweet as her will be adopted soon. Be sure to say hi to Mona on your next visit! 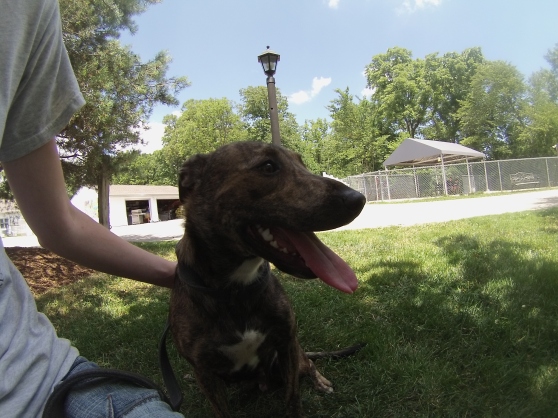 Mona is a sweetie

Krystal the four-year-old Staffordshire Bull Terrier mix is a friendly girl. She gave my hand a quick lick when she first got out of her kennel, and then we were on our way. We took a walk around the woodland preserve, where Krystal had a great time sniffing her way through all of the plants. She was more of a meanderer for the first half, and then picked up the pace for the second half, but was a good leash-walker the whole time.

Krystal likes to give doggy kisses. Whenever I knelt down to take her picture, she would come right over to me. She seems like she might like other dogs, but we always say it’s best for you to bring your current dog(s) to meet any potential new family members, to make sure. Krystal has beautiful blue-gray coloring that will catch your eye as you make your way through the shelter. Stop in soon to meet Krystal!

If you’ve been wondering whether this summer is the right time to adopt a pet, the answer is yes! For the second year in a row, Orphans of the Storm® is participating in the national Clear the Shelters event on Saturday, July 23. Over 100 animals were adopted from Orphans of the Storm® at the event last year, and we’re hoping for even higher adoption numbers this year!

But, if any of the dogs profiled this week (or listed on the Dog Profiles page) have already caught your eye, don’t delay! The shelter is open until 8 p.m. on Thursdays and until 5 p.m. every other day of the week.

Pippa the one-year-old Australian Cattle Dog mix is a true athlete. You’ll see her jumping up and down inside her kennel, and she even does that every once in a while when she’s on a walk! She’s a perfect candidate for agility. Pippa also seems to love water and was splashing her front legs around in the water bowl. So, if you have a pool or live near water, Pippa would fit right in with your activities!

Pippa was actually pretty calm when we were in the off-leash run. Every time I sat down on the bench, Pippa hopped up next to me and gave me doggy kisses. She would then sit or lay next to me while I pet her. She enjoyed following her nose and sometimes did a little digging in the gravel to see what she could unearth. Pippa can be a little bark-y inside her kennel, but she didn’t make a peep when we were outside. If you’re looking for a fun-loving girl to join your active family, come in soon to meet Pippa! 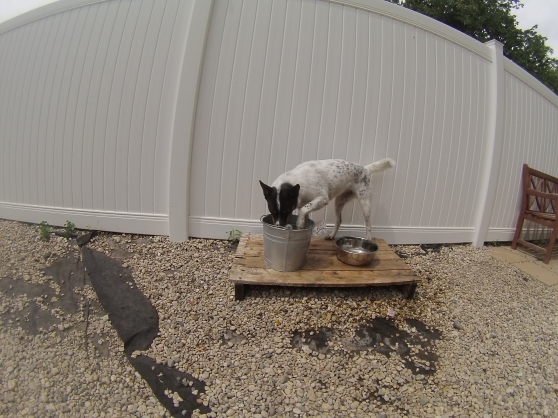 Daffodile the three-year-old American Staffordshire Terrier mix is a pretty girl with lots of energy. She makes a cute little noise when she’s excited, such as when she realizes it’s her turn to come out for a walk. We quickly made our way to the off-leash run, where Daffodile scampered around and explored. She watched me throw a tennis ball, but didn’t seem too interested in fetching it. 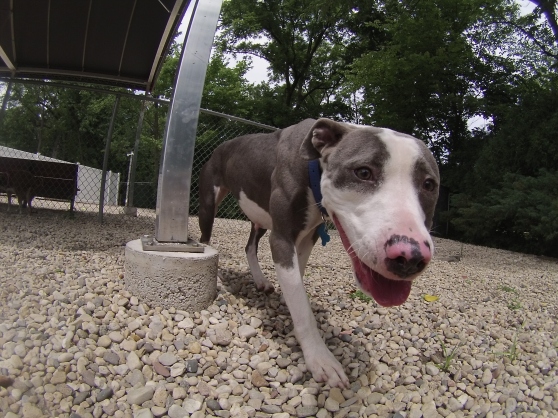 Daffodile has a cute spotted nose

Daffodile can be a cuddler. After she had burned off her initial energy, she joined me on the bench, gave me a few doggy kisses, and attempted to climb into my lap. Daffodile would like to be the only pet in her new home. She’s a strong girl who could probably use a refresher on how to politely walk on a leash, but once she’s in a home where she gets regular exercise that shouldn’t be much of an issue. Stop by soon to say hi to Daffodile!

Daffodile relaxing on the bench

Jacob the five-year-old black Labrador Retriever mix is one of the best-behaved dogs I’ve walked recently. When I came to his kennel with the leash, he sat and stayed (without being told!) until the leash was put on. Then he walked very calmly, just a couple steps ahead of me. He would occasionally look up at me as if to check that he was doing a good job. Of course I told him what a good boy he is!

Jacob asks, “Are you ready for a doggy kiss?”

Jacob enjoyed a good scratch under the chin and behind his ears. It seems as though he might like other dogs, because every time we passed one he would start wagging his tail and want to say hello, though we never got close enough for an official greeting. Jacob already has some gray fur around his nose, but don’t let that deter you. He still has lots of companionship to offer! Be sure to say hi to Jacob on your next visit to the shelter.

Jacob following his nose through the grass

This week, I walked one of the littlest dogs at Orphans of the Storm®, and then one of the largest! (I also walked two medium-sized dogs, but they were both happily adopted that same day.)

Roger the two-year-old Rat Terrier mix has plenty of spunk. He barks a bit inside his kennel, but that’s to grab your attention. Once he sees that he’s going out for a walk, he quiets down–but then starts bouncing in excitement! He’s pretty good at walking on the leash, but he doesn’t hesitate to lead the way.

Roger had a fun time romping around the off-leash run. He sniffed the dog on the other side of the fence but didn’t pay much attention to it otherwise. Roger’s tail was always up and wagging. When I knelt down next to him, he put his tiny front paws in my lap so we could snuggle for a bit. If you’re looking for big personality in a small package, come in soon to meet Roger! 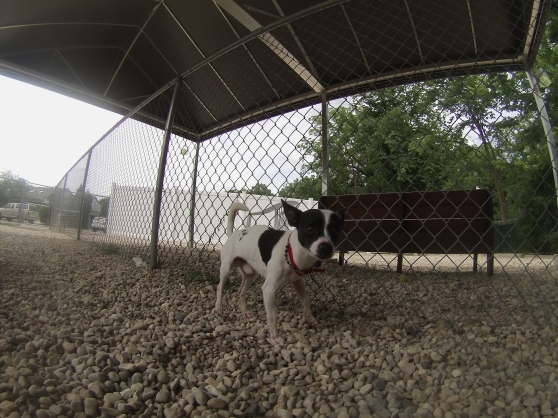 Roger modeling for the new roof in the off-leash runs

Shaka the eight-year-old St. Bernard mix is a handsome, happy boy. He might seem like a lot to handle at first, but he actually walks pretty nicely on the leash after his initial burst of excitement at being out. Shaka is outgoing and will happily give you doggy hugs and kisses even if you only just met him.

Shaka says, “Is that a toy? Are we going to play?”

Shaka is playful. He kept thinking my camera was a toy but I was able to redirect him to a tennis ball. He didn’t exactly fetch, but he was happy to run after the ball. Shaka loves getting scratched on the hips and will do a little dance while you do that. Shaka gets along great with people, but isn’t such a fan of other dogs and would prefer to be the only dog in his new home. Come in soon to see if Shaka is the pooch for you!

Shaka has such pretty, fluffy fur

I also saw Blush, Brutus, Coal, Diamond, Duke, Fred (who is a volunteer favorite because he’s such a sweetheart), Lexi, Lisa, Lucky, Lucy, and Roxy.