There are a few shy dogs (a couple of which are puppies) at Orphans of the Storm® who are still super sweet! They also have made some bubbly doggy companions who are already helping them come out of their shell.

Romeo the one-year-old Treeing Walker Coonhound mix wants to be by his person’s side all the time. He loves to give doggy hugs and will happily stand on his hind legs and hold you for as long as you let him. Romeo was a little nervous when we were making our way around the woodland preserve and was far more interested in snuggling than walking, but once he gets used to his surroundings he should be a much better walking companion. 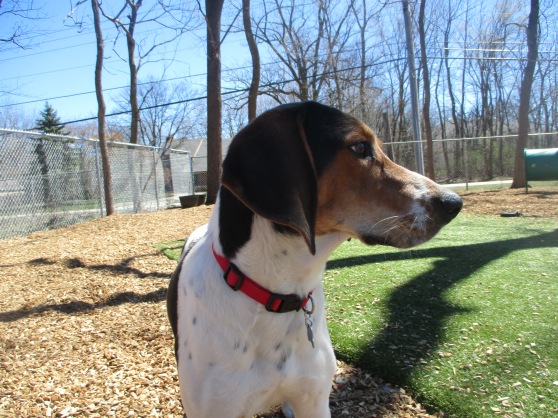 Romeo is a handsome guy

Romeo enjoyed romping around the Enrichment Park and even jumped over one of the agility hurdles after I demonstrated how to do it. He is a quick learner! Romeo would do a quick lap around the park and then come running back to me for more cuddles. He loves getting pet and will lean against you while you scratch his side. Come in soon to see if sweet Romeo is the one for you!

Romeo putting his Hound nose to use

Apollo the nine-month-old Mountain Cur mix (not to be confused with the other Apollo) is a little shy at first, but once he feels comfortable with you then he shows you what a cuddle-bug he can be. Apollo can be a little hesitant on the leash, but after some words and pets of encouragement, he’s a good walking buddy. Apollo will put his front paws in your lap when you kneel down next to him or sit on a bench. He might even give you a quick, gentle doggy kiss! 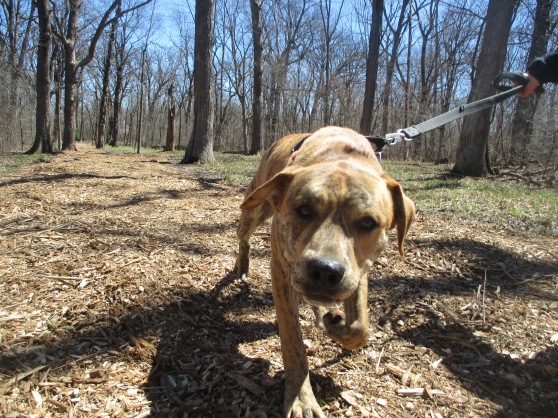 Apollo has such unique coloring!

Apollo gets along with other dogs and is currently sharing his kennel with Bubba (see below). Apollo has also gone to play groups and interacts politely with the other participants, but is also interested in getting attention from the people in the yard. Apollo is a sweet puppy who just needs to build up his confidence a little more. Come in soon to meet Apollo!

Apollo getting used to walking with a harness

Bubba the three-year-old Mountain Cur mix is friendly with everybody. He greets every person he sees with an enthusiastically wagging tail and will be your new best friend in no time. He’s small enough that he can hop right into your lap and cover your face and hands in doggy kisses. Bubba will also roll over next to you so you can give him a belly rub.

Bubba always has a smile on his face

Bubba likes to move at a quick pace and can pull a bit on the leash, but overall he’s a good walking companion. Bubba gets along with other dogs and is currently sharing his kennel with Apollo (see above). This happy-go-lucky guy is sure to bring a smile to his new family’s face. If you think that might be you, come in soon to say hello to Bubba! 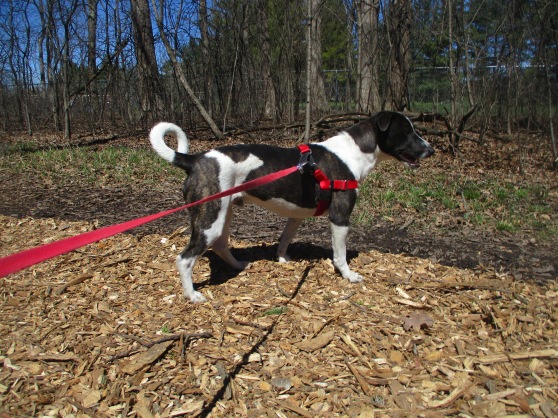 Bubba is eager to explore

Mr. Brown the seven-month-old Dalmatian/Staffordshire Bull Terrier mix arrived at the shelter with his brother, who has since been adopted. Mr. Brown absolutely loves play group and spending time with other dogs. He played a little rough when he first arrived, but the older dogs have taught him much better manners and now Mr. Brown is a play group favorite.

Mr. Brown also loves people. He is very affectionate and loves to snuggle and give doggy kisses. He gladly joined me and another volunteer on the bench to get extra pets. Mr. Brown is up for anything and was even one of our Easter Egg-dogs who got decorated with (dog-safe) fur dye last week. If you’re looking for a fun-loving puppy, be sure to say hello to Mr. Brown on your next visit to the shelter!

Mr. Brown is ready to give lots of kisses!

Athena the nine-month-old Mountain Cur mix is extra shy right now, but she already has a group of volunteers who love her and are working to build her confidence. She isn’t quite used to walking on a leash yet and sometimes gets carried from her kennel to an off-leash yard, but perks up once she’s free to romp. Athena also feels better when she has a doggy companion to walk next to or play with.

Athena shows what a sweetheart she is once she has a few minutes to get to know you. By the end of our outing, she was coming over to me when I called to her and was giving me a couple quick doggy kisses. Athena is looking for a home that will give her the extra TLC she needs to become an outgoing puppy again. Stop in soon to meet Athena!

Athena is tentative but loving

Here is a short but extra sweet success story! The previously profiled pooch Frisco, who now goes by Hadji, was adopted by the Leato family. Here is their story, and the most adorable pictures!

Five years ago, we adopted Frisco (now Hadji) from Orphans of the Storm®. Without a doubt, Hadji is the best dog that has ever walked into our lives and our family would be lost without him. 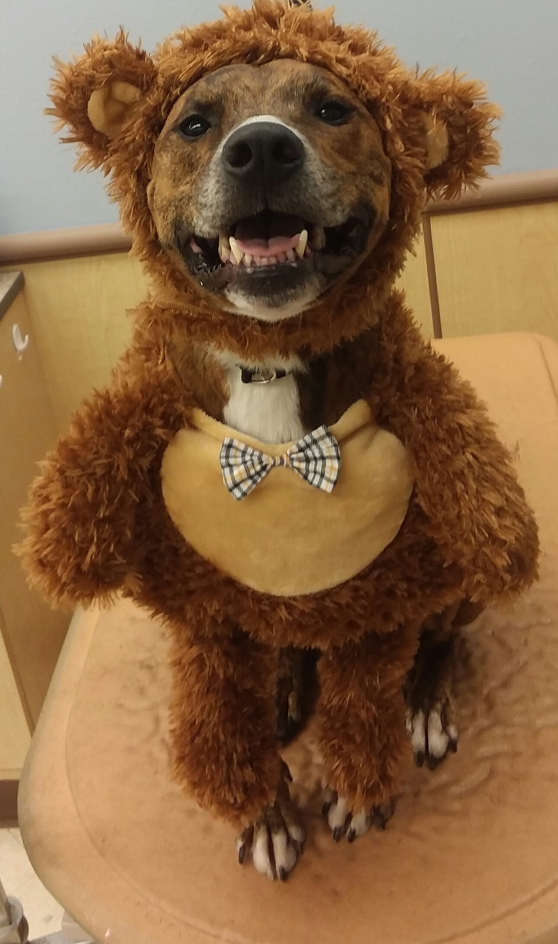 Hadji is very loved and has many roles in the family. He is a cat sitter, bus stop greeter, patient for his cousin’s “veterinary clinic,” imaginary princess, big brother to a miniature heeler, and a nap time buddy. 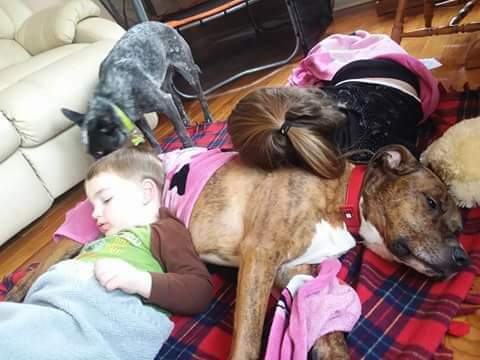 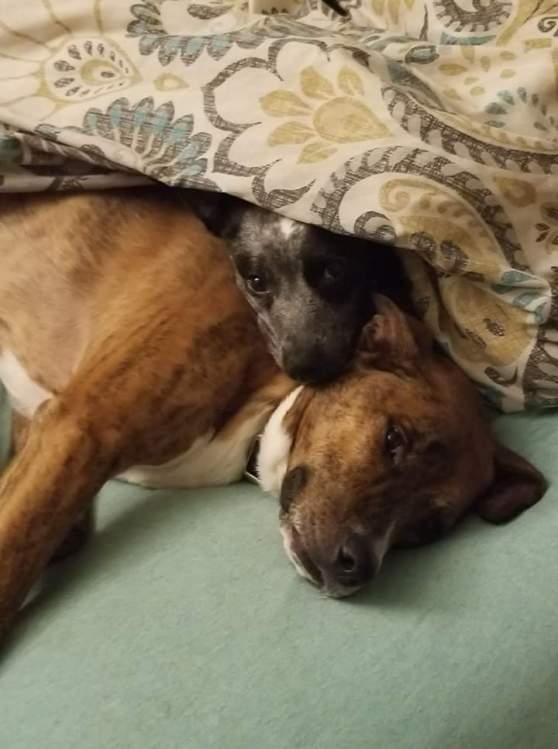 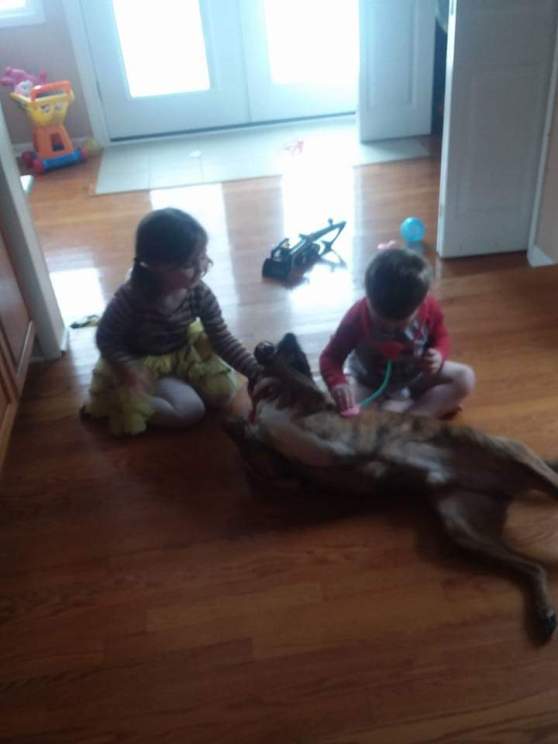 We are very thankful to have found a piece of our hearts at Orphans. Thank you for all that you do. 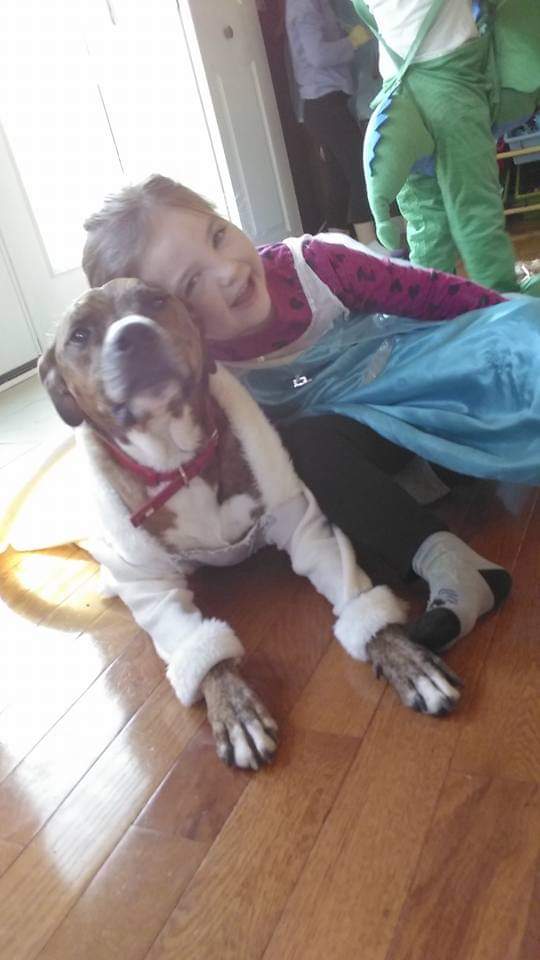 Thank you to the Leato family for sharing your story!

If you would like to share your own Orphans of the Storm® success story, please email meetthepooches@gmail.com. We never get tired of hearing all these happy “tails”!

I have a double success story to share today! Margie and her brother adopted Francis and Randy, who now go by the names of Buddy and Cubbie. Here is their story:

My brother and I adopted “Francis” and “Randy” on February 28. We went to see Francis and even though I called that morning to make sure he was in Deerfield, he was taken to the Highland Park location. While we waited for him to come back, we looked at dogs who had just been brought in that morning from Tennessee. And there we found “Randy.” I guess it was meant to be to adopt them both! Francis is now “Buddy” and Randy is now “Cubbie” (brother is a Cubs fan). 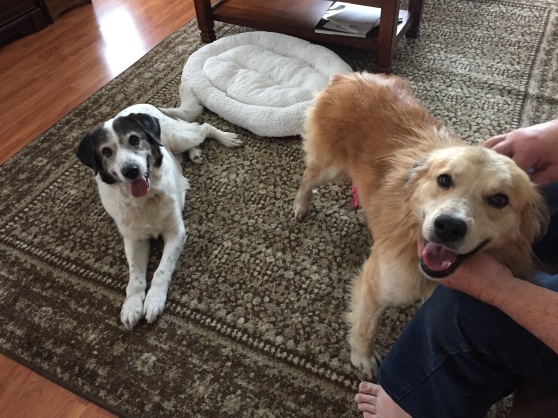 Buddy was returned by a couple who said he peed in the house and barked when alone. Our luck that they couldn’t bother to train him. He has had a few accidents in the house but is getting better. He does bark when I leave him alone in the house to take Cubbie for a longer walk. He limps due to a swelling on his right leg that doesn’t stop him from much, but he gets a shorter walk than Cubbie does. Buddy is around 8 years old and is a pretty chill dog. He is the alpha of the two and barks when Cubbie bothers him too much or craves too much attention from us. Buddy immediately took to his doggie bed and sleeps there most of the time, half of his body off and half on. He likes attention (sometimes) and will put his paw on you if you stop before he’s done. He’s not into toys that much but has destroyed a few rope toys already, chewing them up.

Cubbie didn’t stay at Orphans for long. We saw him the morning he came in and picked him up at the vet’s the next day. He tested positive for worms and fleas/ticks and had to take medicine. He is very smart and I had to figure out different ways to get him to take it. I had to fight with him to take the pills and he never once snapped at me. He’s about 4 years old and is a cuddle-bug. He craves attention and will nose Buddy out of the way to get it. Since he’s younger, he likes to play a bit more, especially out on walks when he should be doing his business. He will bark and whine at dogs going by but he just wants to visit. He whines when a neighbor walks by and wants to stop to be petted. We have met a lot of our neighbors this way! Cubbie doesn’t know what a doggie bed is for, he tries to play with it. He likes sleeping in a corner on the floor.

Both of them must have had families. They can sit and heel and somewhat know some other commands, like “no,” “come,” and “drop it.” They are both very people-oriented. We had some friends over for lunch and after they got their petting in, they slept the rest of the lunch. 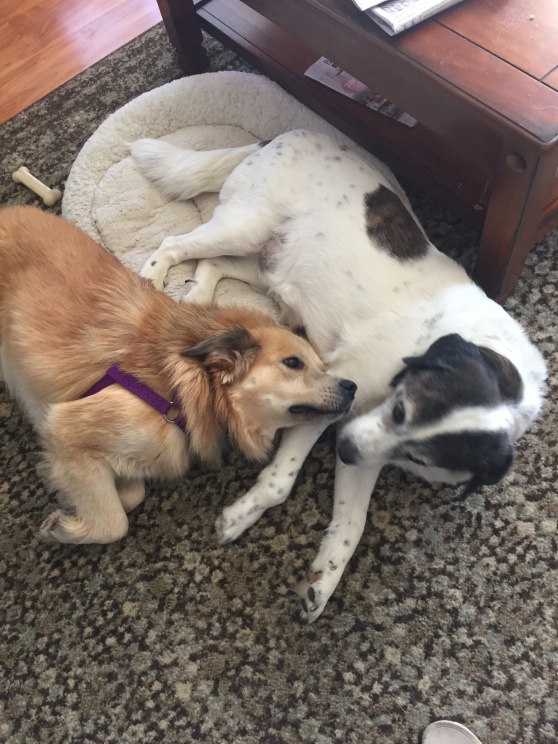 Both dogs are the sweetest things and are bonding well. I don’t know how we lucked out getting two such good dogs! 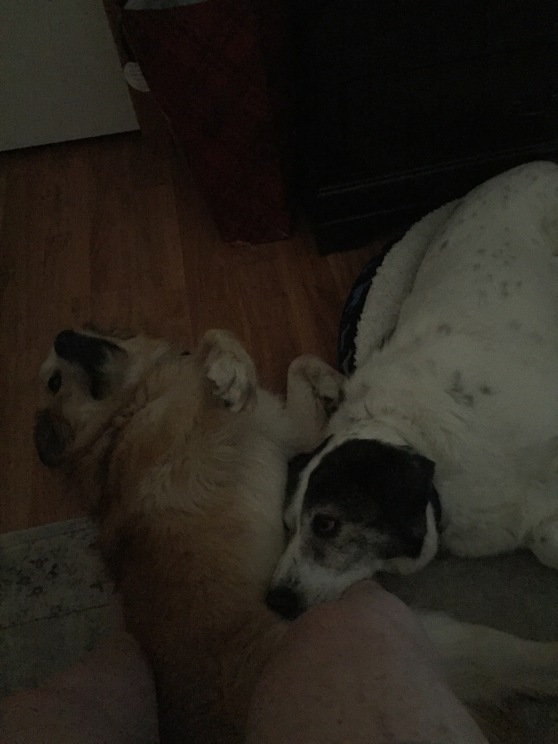 Thank you for sharing Buddy and Cubbie’s story, Margie!

If you would like to share your own Orphans of the Storm® success story, please email meetthepooches@gmail.com.

Help get those dog tails wagging and those cats purring by attending Orphans of the Storm®’s Annual Benefit Dinner, Wags and Whiskers. It’s this Tuesday, April 9, at 5:30 p.m. I hope to see you there!

Norman the two-year-old Staffordshire Bull Terrier mix is a happy boy. I haven’t walked such an attentive dog in a long time! Norman likes to check in often with the person on the other end of the leash. Sometimes he stopped and looked up at me to get a reassuring pet, and sometimes he’d just look over his shoulder at me as he walked. He can pull a bit when he’s excited, but for the most part he’s a nice walking companion.

Norman is also affectionate. He joined me on the bench a couple times and gave me some doggy kisses. He enjoyed exploring the off-leash run but wasn’t particularly interested in playing fetch. Norman does well with other dogs and goes to play group often. He was even enlisted to help a new puppy learn appropriate play group manners. Come in soon to see if Norman is the pooch for you! 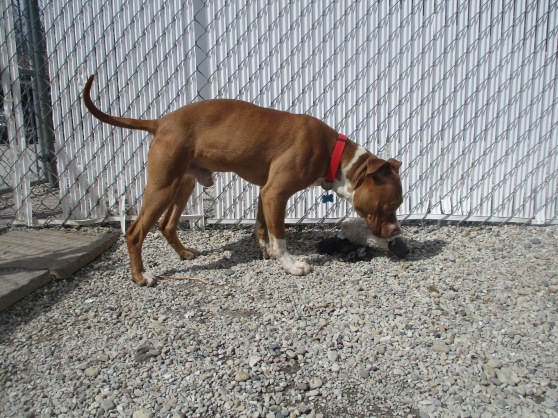 Sox the eight-year-old Staffordshire Bull Terrier mix is a super-sweet girl. Any time I knelt down to her level or she hopped up next to me on the bench, she covered my face in doggy kisses. Sox is also an excellent walking companion. She didn’t pull on the leash at all during our walk around the woodland preserve and was happy to walk at whatever pace I went.

Sox is very appropriately named, with her four white socks

Sox loves toys, especially stuffed animals. She can happily keep herself occupied by tossing the toys in the air and gently chewing on them. She liked having at least two toys to alternate between. Sox is looking for a special, caring home. She was diagnosed with mammary malignancy when she arrived at the shelter, but her prognosis is good and she still has time to warm up someone’s heart and home. If you’re looking for a lovable senior, come in soon to say hello to Sox!

Sox preferred the hedgehog, but the lamb was fun too

And here are this week’s play group participants: 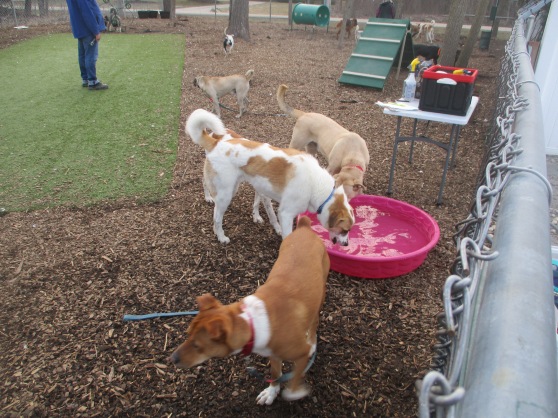 We’ll need to add more puppy pools as the weather gets warmer! Elijah, Jack, and John Boy enjoying a break (with Sasha, Quinn, Maya, Jax, Huckleberry, Trent, and a couple others in the background) 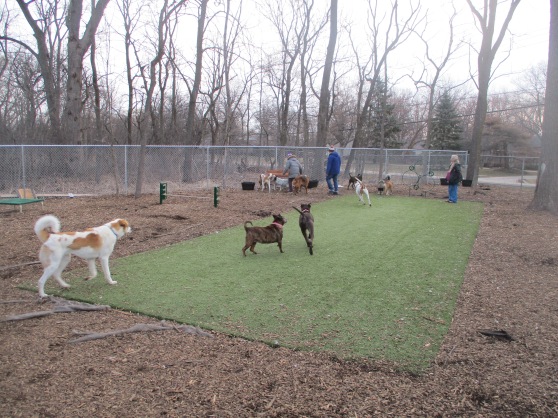