Orphans of the Storm® will be closed on Monday for Labor Day, but open the regular 11am-5pm hours on Saturday and Sunday. Enjoy the long weekend by welcoming a new dog into your home!

Chevy the seven-year-old Terrier mix is all about the cuddles. As soon as you kneel down to his level, he comes right over and plops down next to you. He also has no problem being picked up and actually seems to enjoy being carried more than he enjoys walking on the leash (though for exercise purposes, he should still walk more than he’s carried). Chevy is a little shy and nervous, so being close to a person is comforting for him.

Chevy is a little cutiepie

Chevy did a little bit of sniffing while we were out but could use some more encouragement when it comes to walking on the leash. Chevy was sharing his kennel with another dog who has since been adopted, so he could go to a home with or without another dog. If you’re looking for a sweet little cuddle-bug, come in soon to meet Chevy!

Maggie Mae the two-year-old Labrador Retriever mix is one of the most affectionate dogs at the shelter right now. She greets every person as if they were her long-lost best friend. Maggie Mae gives the most human-like doggy hugs I have ever experienced. She literally wraps her front paws around your waist and will stand like that as long as you let her. She will also cover your face in doggy kisses whenever she’s given the opportunity, and will try to climb into your lap when you sit down. 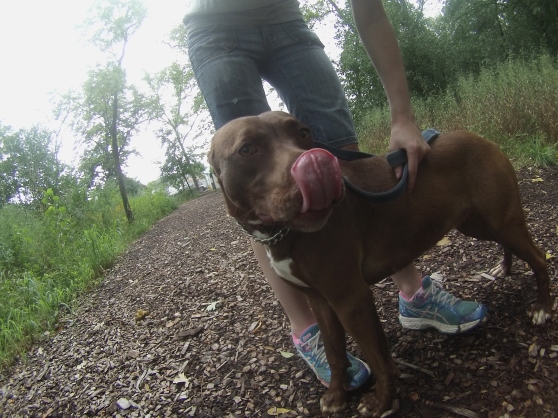 Maggie Mae is always ready for a cuddle and a kiss

Maggie Mae is active and playful. She can pull a bit on the leash when she first comes out of her kennel, and prefers to walk at a quick pace. She would love a yard to call her own and have plenty of squeaky toys to play with. While Maggie Mae loves people more than anything, she is not a fan of other dogs and would like to be the only dog in her new home. Be sure to say hello to Maggie Mae on your next visit to the shelter!

Maggie Mae is a smiley pooch

Cooper the eight-year-old Border Collie mix excitedly jumped up and down when he realized it was his turn to come out, but then stayed perfectly still when it was actually time to put his leash on. Cooper is a sweet boy who gave me a doggy hug as soon as he came out of his kennel, and gave me several other doggy hugs during the rest of our outing. 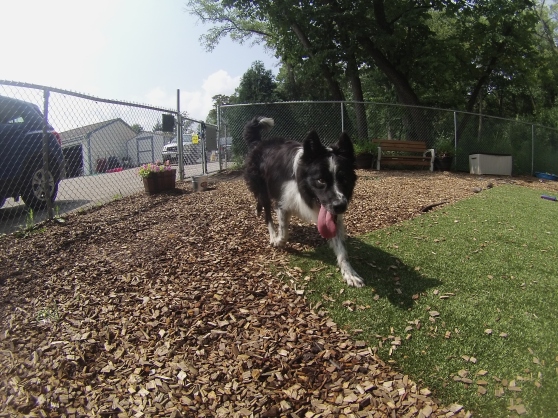 Cooper is a good-looking guy

Cooper may be bordering on “senior,” but he doesn’t act like it. He zipped around the Enrichment Park, went a few steps up the A-frame before hopping off, and splashed around the puppy pool. Cooper walks pretty well on the leash, though he does like to weave back and forth to pick up more scents. He isn’t too fond of other dogs, so Cooper would do best as the only dog in his new home. If you’re looking for a smart dog to do all sorts of activities with, come in soon to meet Cooper! 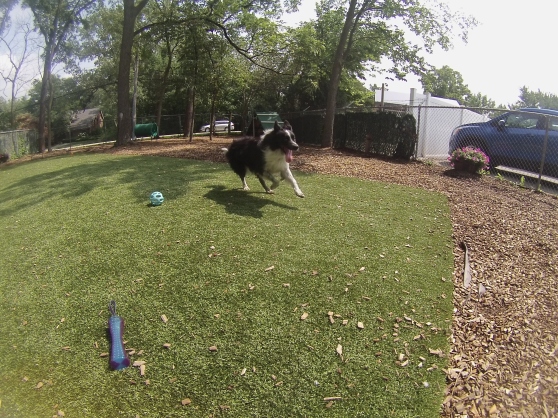 It’s a bird! It’s a plane! It’s Cooper flying through the Enrichment Park!

I also saw Big Boy and Mojo, Dunkin (who gave me a doggy hug as a hello), Harley, Jasmine, Monte, Nash, Thunder, and Whizzer.

Clear the Shelters 2018 was another great event for Orphans of the Storm®! 34 dogs and 25 cats went to their new happy homes. NBC 5 Chicago’s LeeAnn Trotter was there for several hours, meeting dogs and interviewing adopters. You can see one of her clips here. Below are just a few behind-the-scenes images from before the gates opened on Saturday morning, but you can see the full Orphans of the Storm® Clear the Shelters photo album on Facebook.

There was signage all around the shelter 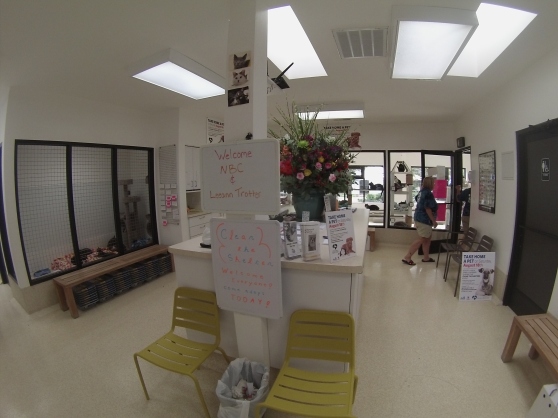 The cat area was all decked out for the event, too

The adoption tent was the place to be! 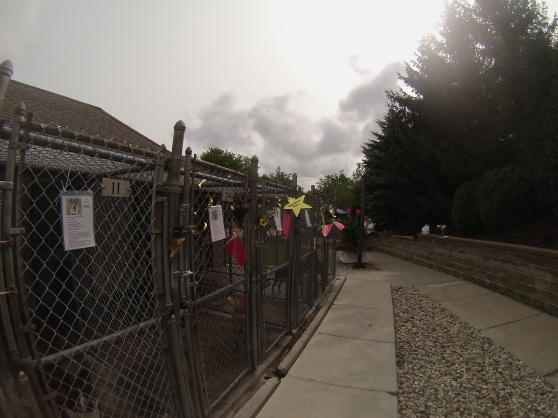 This year, several dogs were marked as “Volunteer Favorites” and got a gold star

All of the dogs got either a bandana, a flower, or a bowtie to look their extra-best

The NBC van was there to capture all the excitement

While waiting for potential adopters, I also spent some time with Bella, Big Boy and Mojo, Cass and Crowley, Hobbs, Jack, Nash, Oliver, Quinn, and Sullivan (who showed off his affectionate side when he joined me on the bench, covered my face in doggy kisses, and then laid down in my lap). If you couldn’t make it in last weekend, there are still plenty of dogs who would be so happy to meet you this weekend!

Tomorrow, Saturday, August 18, is the annual Clear the Shelters nationwide event! Orphans of the Storm® is participating for the fourth year in a row. On this day, adoption fees for dogs and cats 5 months and older will be waived. This waived fee includes spay/neuter, but additional veterinary costs (such as final shots) will still apply if needed.

There are more than 100 dogs ready and waiting to join a new family this weekend. Here is a list of the longest long-timers, who have been at Orphans of the Storm® for 2 or more years, and who have their paws crossed that this year is their year!

And below are some newer dogs for you to meet, too!

Monte the one-year-old Vizsla mix found himself at the shelter because he was too nervous for his first family. He is still skittish, but has come a long way since he first arrived. He’s afraid of some things, like walking past the big dumpsters in the parking lot or having a branch of the bush he’s sniffing touch his back unexpectedly, but doesn’t seem fearful of people. Monte greeted me with a doggy hug as soon as he came out of his kennel, and gave me a few doggy kisses during our walk.

Monte is a handsome pup

Monte is an excellent walking companion. He only pulls on the leash if something spooks him. Otherwise, he’s super easy. Monte enjoys being pet and always came straight to me when I knelt down to his level. Monte gets along with children, so he could join a family with kids. He’s just looking for the right loving home to help him fully come out of his shell. Be sure to say hello to Monte on your next visit to the shelter!

Monte cooling off in the shade

Ruthy the one-year-old Chow Chow mix is a poofball whose face makes her look like she’s half-bear, half-fox. Even though she’s young, she already knows some manners. For example, she didn’t take a single step away from her kennel until I put the right walking collar on her. Ruthy walks nicely on the leash for the most part, though she does get the occasional burst of energy and wants to run a little ways.

Ruthy is so fluffy

Ruthy hopped on and then over one of the benches during our walk, and then joined me on another bench later so I could pet her some more. She can get a little bark-y when she passes by other dogs, so Ruthy would do best as the only pet in an adult home, with someone who has experience with her breed. If you love Chow Chows, come in soon to meet Ruthy!

Trent the five-year-old Black and Tan Coonhound mix is a pretty typical Hound dog. He can be talkative with that signature baying, but was mostly quiet when we were out on our walk. Trent pulls on the leash a bit when he first comes out of his kennel because he’s excited to go for a walk, but he settles down quickly and is a good walking companion.

Trent seems to be particularly fond of walking through tall grasses. His nose goes high and low to pick up as many scents as it can. It’s fun to watch! Trent is a sweet boy who likes getting pet and is gentle when taking treats from your hand. If you ain’t looking for nothing but a Hound dog, come in soon to meet Trent!

You will often find Trent with his nose to ground

Cass the six-year-old Catahoula Leopard Dog mix came from an owner who lost their job and couldn’t take care of him anymore. He used to live with another dog before he came to the shelter. Cass attends play group regularly and gets along with other dogs.

Cass and Crowley are a dynamic duo

Cass is easy to walk. He didn’t pull on the leash at all, even when he first came out of his kennel. Cass enjoyed exploring the off-leash run. Cass is definitely more of a sniffer and was snuffling around behind the bushes for a while. He is affectionate and will give you doggy kisses. Cass is looking for a home with either just adults or a family with older children. Be sure to say hello to Cass!

Chip the ten-year-old Beagle mix may be a senior, but don’t let his age fool you. Chip still has springs for legs! When I was putting his leash on, he jumped straight up and booped my nose with his nose. Chip is a silly boy who starts barking when he sees or hears people in the distance. He also apparently doesn’t like golf carts and got a little huffy when one passed by the other side of the fence at the far end of the woodland preserve. 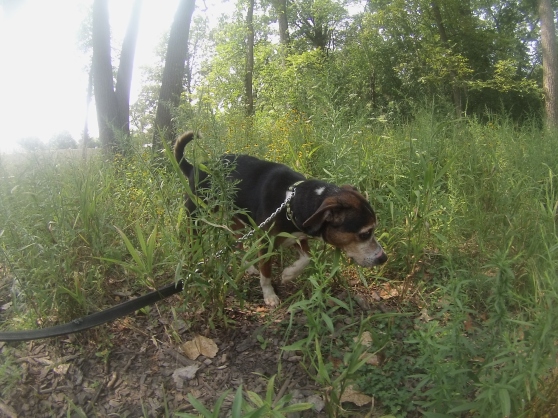 Chip making his way through the woods

Chip is a problem-solver. It was a hot day, and he was getting tired by the end of our walk. So what does he do? Goes to the shady underside of a bush, digs himself a little bed in the cool dirt, and plops down to take a breather. Genius! When it isn’t too hot of a day, Chip is a nice walking buddy who moves at an easy pace. If you’re considering an older dog but still want some spunk, come in soon to meet Chip!

Chip is a smarty-pants

I also saw Big Boy (who thinks he is a lapdog) and Mojo, Conny (who loves belly rubs), Elijah, Jasmine (who is super sweet), Nash (who enjoyed romping around the Enrichment Park and found a new favorite squeaky toy), Rudy, and Sadie (who covered my face in doggy kisses). 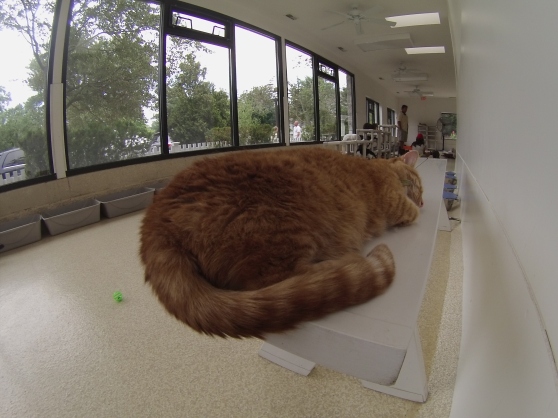 I believe this sleepy kitty is Robin

Cooper is a volunteer favorite 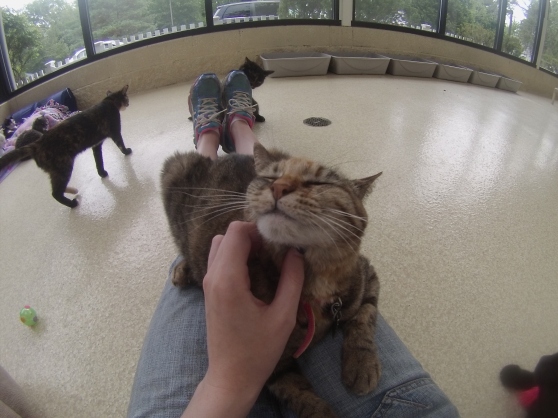 This cuddler stayed in my lap a long, long time and batted away any other cats who tried to get pet 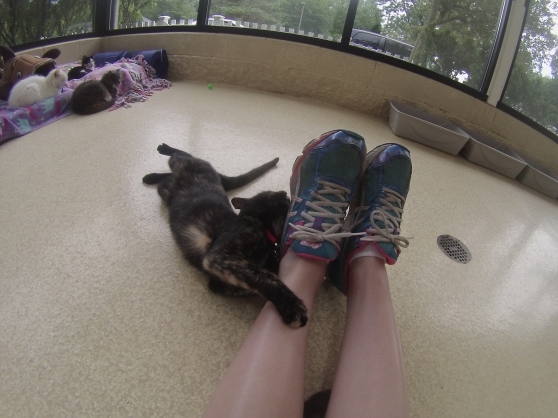 This one is a little rough around the edges, but will purr and purr once settled in your lap 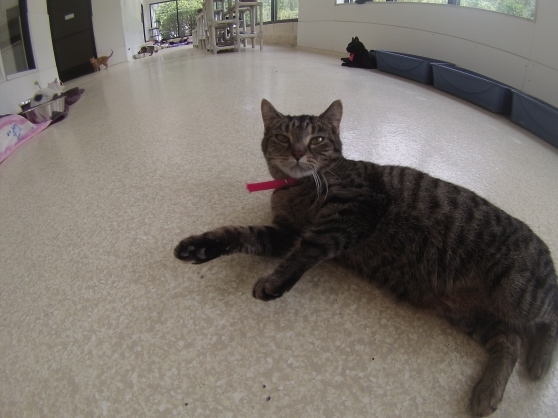 This one likes belly rubs!

This friendly cat is making a bit of a silly face in the photo, but was one of the first to greet everyone who came into the cat room 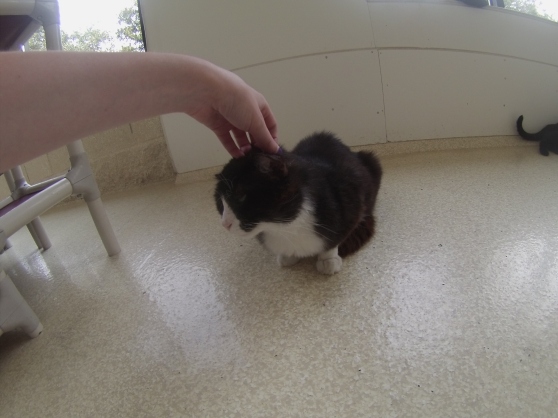 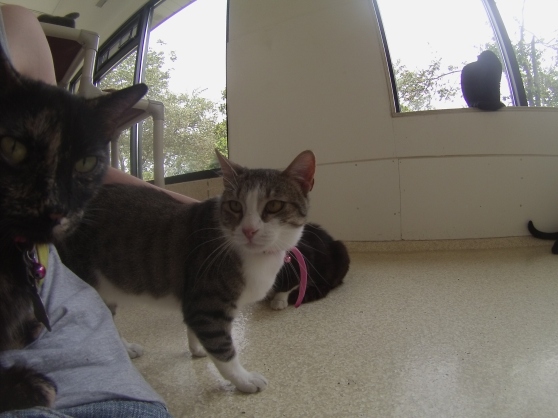 This kitten just woke up from a nap

If you’re looking to stay cool with a new feline friend, come in soon to meet the purr-fect one for you!