Last week, Orphans of the Storm® was excited to welcome Dogs Playing for Life! Dogs Playing for Life is a program that travels to shelters around the country (and internationally!) to “demonstrate both the practical efficiencies of play groups for the rescue organization, as well as the emotional and behavioral benefits for the animals.” 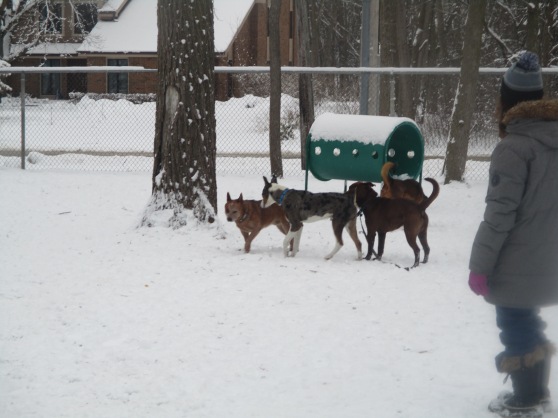 Bonus (who has since been adopted!), Leon, and Nando (with Roxy doing her own thing in the background)

Dogs are naturally social animals, but if you’ve visited or seen pictures of most animal shelters, dogs are kept separate in individual kennels. They get to socialize with the human staff, volunteers, and potential adopters, but don’t often get an opportunity to socialize with other dogs. Implementing play groups for shelter dogs has many benefits, including:

Dogs Playing for Life leads multi-day seminars that include a presentation and several days of hands-on training. At Orphans of the Storm®, more than 40 volunteers attended the presentation and almost all of those attended at least one of the six hands-on sessions. Several members of staff attended as well. We learned about different play styles, how to introduce dogs to the play group, and–most importantly–how to keep both the dogs and people safe.

A key part of Dogs Playing for Life is that it really is all about the dog-to-dog interactions. There are usually only 2-4 people inside the yard with the dogs (depending on how many dogs are in the yard at the time) and they are mostly there to keep an eye on things. The people don’t pet the dogs or play with them in any way. They’ll correct a dog’s behavior if the other dogs aren’t correcting it themselves, but it is truly amazing (especially to me, who has only ever owned one dog at a time and has very little experience with multiple dogs in one space) how well the dogs communicate with each other and work things out on their own.

During the hands-on training, almost every dog at Orphans of the Storm® got to join a play group at least once. This includes dogs that we all thought didn’t get along with other dogs! Some examples include Barney, Cheyenne (Shyanne), and Tom. Successfully playing in a group is not a guarantee that these dogs can go to a home and spend all day, every day living with another dog–but it is still great to know that they are capable of appropriate dog-to-dog interactions!

Ruth, Leon, and John Boy (sorry for the blurriness, I got snow on my lens!)

Play groups don’t only benefit the super-energetic dogs. Shy dogs, like Quinn and Ruth, came out of their shells and were playing in the course of just one group outing. Jax the German Shepherd (who I haven’t had a chance to profile yet) arrived at the shelter scared and overcompensated by barking at everything–but in the play groups, he’s a happy and playful pooch. When you just let dogs be dogs, incredible things can happen!

Orphans of the Storm® would like to thank the ASPCA and the Petco Foundation for bringing the Dogs Playing for Life program to us.

5 thoughts on “Orphans of the Storm® Dogs Playing for Life”