Orphans of the Storm® is still open just by appointment only, but you are now able to book appointments online directly on our website! You can still call 847-945-0235 to schedule an appointment as well. Don’t delay, there are so many sweet and snuggly dogs ready to meet you!

Ozzie the four-year-old Labrador Retriever/Hound mix is a smart, gentle boy who also has a playful streak. Being a retriever, he is excellent at playing fetch and especially loves tennis balls. He can catch the ball in midair and brings it right back to drop at your feet. He isn’t pushy about playing fetch, though–if you don’t throw it right away, he’s content to snuggle instead. But as soon as you pick up the ball again, he is ready to play!

Ozzie already has some good manners. When he comes to the gate at the entrance to the shelter’s walking trail, he sits nicely without being asked while he waits for you to open it. Ozzie is super snuggly and loves to lean against you while you pet him, especially if you’re scratching his favorite spot on his hip. He is an excellent walking companion and does great on the leash. Ozzie gets along well with other dogs and attends play group, so he could go to a home with or without another dog. Ozzie would also prefer an adult-only home. Come in soon to see if Ozzie is the pooch for you!

Mr. Brightside the two-year-old Pit Bull Terrier mix is a serious chonk who will make you smile just by being in your presence. He loves being with people and has done great at offsite events where he had the opportunity to make lots of new friends. But his absolute favorite things are toys! Mr. Brightside heads straight to the toy bin before every walk and literally climbs inside, snuffling around for the perfect toy (or toys) to carry with him on the trail.

You might think Mr. Brightside would be distracted and want to play instead of walk, but having a toy in his mouth actually makes him a super easy walking buddy! He lumbers along and only stops occasionally to adjust how he’s holding his toy. He can sometimes destroy stuffed animal toys, so would do best with sturdier options in his new home. Mr. Brightside is looking for a home where he can be the only pet and get all of your love and attention. This big boy will give you plenty in return! Come in soon to meet Mr. Brightside!

Princess Peach the two-year-old Pit Bull Terrier mix is all about comfort—as a princess should be! She loves to create her own bed in the yard by digging in the dirt until she gets down to the cool part, then curls up and settles in. You may want to set aside a shady part of your garden where you won’t mind her digging! Princess Peach also likes to stretch out on cool concrete during hot afternoons and get belly rubs.

When she isn’t lounging, Princess Peach is the perfect walking buddy. She often looks up at whoever is holding the other end of the leash and wags her tail to let you know she’s having a good time. Princess Peach is very snuggly and likes to give doggy kisses. And she doesn’t only like people—she’s happy to spend time with other dogs, too. She regularly participates in play group and has a long list of doggy friends, so she could go to a home with or without another dog. Schedule an appointment soon to meet Princess Peach!

I also got a quick but affectionate hello from the not-yet-profiled Mama Mae.

The first dog I spent time with today was recommended to me by a reader. If anyone would like to see a specific dog profiled, please leave a comment and let me know! I’m always eager for suggestions.

Tyson is a silly one-year-old Pit Bull Terrier mix who absolutely adores running after tennis balls or any other toy that happens to be around. The first thing he did when we got inside the run was pick up a tennis ball. Seeing this interest, I thought Tyson might like to play fetch. He was thrilled to chase after the ball, and even threw it around himself a little bit, but rather than returning the ball to me, he started to make a pile of toys in front of the bushes.

Tyson ready to chase a ball

I started picking up the toys from his collection and throwing those across the run for him. Realizing what I was doing, he chased after the ball and then started to make his pile behind the bushes. He eventually got every single toy in the run to that back corner, and then looked at me as if to say, “What are we going to play now?” I told him that he had to bring a ball back to me for us to keep playing, which he eventually did.

Who can resist Tyson's attentive face?

He is a goofball with an incredibly expressive face. He watched me wherever I went, even if we were on opposite sides of the bushes. I could see his face low to the ground, peering out from under the branches, seeing if I was going to steal a ball from his proud horde. He used the branches as a back-scratcher a few times also, which was funny to watch. This cutie would love to find a forever playmate!

Red is a new staff favorite, and for good reasons. This three-year-old Dachshund mix is such a little sweetheart! When I went to her kennel to open the slot to the outside half, she was too delighted that someone was standing in front of her to go out the door. It took some pointing and encouraging to get her outside to where I could put her leash on. When I met her outside and opened the kennel gate to let her out, she jumped right into my lap, which made it easy to get the leash over her head.

Red is the kind of dog who loves to get her exercise, and then come snuggle in your lap. She first sprinted around the run a little bit while I sat down on the bench, and then hurtled herself onto the bench next to me and put her front paws in my lap for a quick pat. Then she was off again, this time at a slower pace so she could put her hound nose to good use.

Red with her nose leading the way

I stood up and walked towards the middle of the run, kneeling down to Red’s level. She came hurrying over to me and again put her front paws in my lap. While I scratched her back, neck, and ears, she gave me doggy kisses on my chin and nose. She then rolled over onto her back for a belly rub, looking absolutely content. 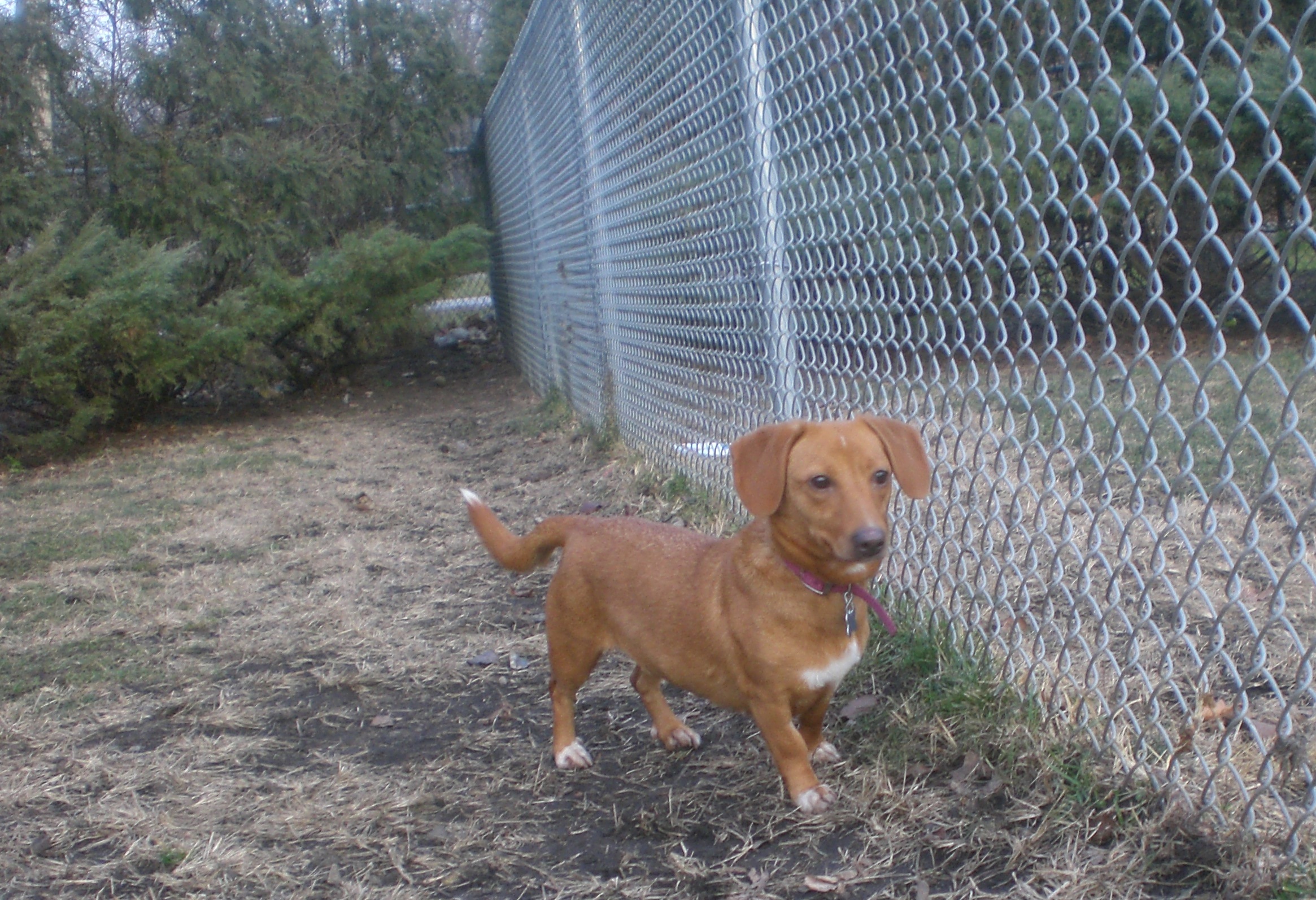 This affectionate, adorable little girl will make a family extremely happy. Come to Orphans of the Storm® and say hello!

Today was another visit with some of Orphans of the Storm®’s long-timers. The dogs I spent time with today have each been at the shelter for over a year and are ready for a real home. Luckily, I remembered to bring my camera (finally) so you can see more of these lovable pooches.

First on my list was Billy, a six-year-old Pointer mix. Don’t let that gray fur on his face fool you! He absolutely loves to run and play. Billy and I sprinted to the grassy run and I took him off his leash so he could explore all he wanted. After rustling around inside the bushes at the far end of the run, Billy emerged with a tennis ball in his mouth. He is a big fan of playing fetch, and isn’t at all possessive of the tennis ball. He’s even spry enough to jump up and catch the tennis ball in midair!

Billy is also an extremely intelligent dog. In all of his doggy years, he has learned that treats tend to appear from inside pockets. Every time I reached for my pocket to either get my camera or put it away, he expectantly sat down right in front of me and nosed my pocket. I wished I had a treat to give him, because he was so good at it.

A look at Wizard's face

Next was Wizard, a three-year-old Shepherd/Shar Pei mix. He is a little chubby, but enjoys going on walks and does well on a leash. Don’t expect to walk too briskly, though, because Wizard likes to sniff everything. It was hard to get a picture of his precious face because he almost always had his nose to the ground.

Wizard's round tummy and curly tail

Wizard also seems to be a little on the ticklish side, which I personally think is an endearing trait. After scratching his velvety ears, I started to scratch his back. As I moved towards his tail, one of his back legs started kicking. It was adorable.

Wizard's nose to the ground

Molly stretching her legs in a lap around the run

The last dog for me today was Molly, a three-year-old American Staffordshire Terrier mix. Molly was the best leash-walker of the three and was happy to walk just slightly ahead of me without pulling as we made our way to the run. Her light brown eyes match her tan markings and give her a very unique look – a look that anyone can love.

Molly is a giant sweetheart. She enjoyed sitting next to me as I gave her a good pat, and she would occasionally give me some slobbery doggy kisses. She even attempted to climb up onto my lap so she could reach my face better. If you want to make her extra happy (which everyone should, because she deserves it), you should scratch the right side of her neck. She’ll lean into your hand and pant cheerfully.

Molly sniffing in the bushes

On your next visit to Orphans of the Storm®, make sure to stop by and say hello to these three adoptable pooches!